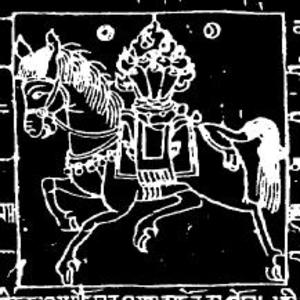 Raksha Mancham is a musical project of Eric Fabry from Belgium influenced by the music of indigenous peoples worldwide, and whose music is played on native instruments from Tibet, Egypt, Brazil, Morocco, Mali, Nepal and the Cameroon, along with many other acoustic percussion, wind and string instruments. RAKSHA MANCHAM (The Dance Of The Judgement Of The Dead) is an old Tibetan Buddhist ceremony of dance. It describes what happens after death, the importance of 'good' and 'bad' acts, and the judgement of the dead men, as an answer for what they did in their lives.

In that way, RAKSHA MANCHAM denounces human beings, social groups, communities, people, nations, humanity and especially inhumanity... for what they did: 'bad' or 'wrong'.
RAKSHA MANCHAM's approach is political. It intends to make people think by themselves presenting the side effects of the industrial society and the criticizable facts in human history. No-one is protected as too many things are an object of judgement: genocides, ethnocides or culturcides *; torture, xenophobia, racism, political imprisonment, environmental destruction..
The music of RAKSHA MANCHAM is violent, aggressive. In fact, it is a view of the world, of life on Earth in the late XXth century in a nearly dead world. The music is based on a post-industrial dark view of life. The structure is tribal, the rythm is primitive because we must find primal rythms that exist in each person, deeply hidden by commercializating plans. And we use drums as a central element in our project because in numerous traditional cultures, drums are priviledged bound between man and the Spiritual or Sacred.

* Red Indians by Americans during XVIIIth, XIXth and XXth centuries, Tibetans by Chineses since the XVIIIth century and it still continues, Armenians by Turkishs in the late XIXth and the early XXth century, Kurds by Irakis, Iranians, Russians, Syrians, Turkishs for more than a hundred years, Palestinians by Israelians since 1948, Afghans by Russians 1979, Kafirs by Afghans in the late XIXth century, Chakmas by Bengalis since 1975, Karens by Burmeses since the Second World War, inhabitants of Timor by Indonesians since 1975, Papuans by Indonesians since 1965, Indians of Amazonia by Brasilians since the beginning of the century, Anyanyas by Sudaneses since 1955, Erythreans by Ethiopians since 1952, Tuaregs, Tsiganes...

Concerning the conclusion of this subject, Raksha Mancham can only reinforce the Red Indian 'Prophecies' written by famous Red Indian leaders one or two centuries a