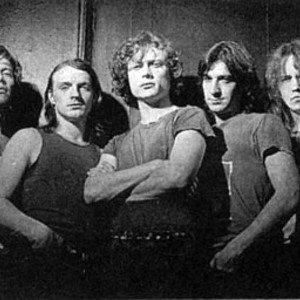 Raga Rockers is a Norwegian rock band from Oslo. with Michael Krohn (ex- Kj&oslash;tt) on vocals. The band was formed in 1982 by front man Michael Krohn. The other members were Livio Aiello on bass, Bruno Hovden on guitar, Jan Arne Kristiansen on drums Tore Berg on guitar, Hugo Alvarstein on Keyboards, and Nils Aune (ex- Svart Framtid and Kafka Prosess) on guitar and keyboards. They recorded their very first album in 1983, called The Return of the Raga Rockers.

For the next few years they played a few farewell-shows, but by 1995 they recorded a new album called Perler For Svin. Seemed they wouldn't quit after all...
The 1996 live album Live Again followed, and the studio effort Til Helvete Med Raga Rockers (1997). In 2000 they released an album called simply Raga Rockers, but then they went into some sort of hiatus.

In 2005, a compilation album was released, followed by an extensive tour.
In 2007 they released the album ?bermensch, proving they are still to be counted among Norwegian rock's finest.

The Beginning of the Raga Rockers