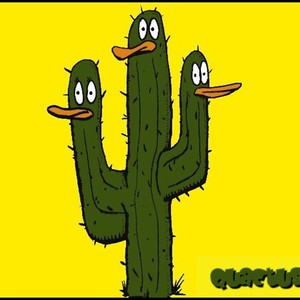 Formed during the Spring of 2005 from an eclectic mix of gentlemen from both coasts and a little of the Midwest, Quactus came together in Los Angeles after guitarist Seth Gordon, drummer Matthew McDuffee, guitarist Gabriel Weiner, and bassist Greg Zachan had the good fortune of crossing paths with each other. The members of Quactus have over 30 years of musical and audio instruction amongst them in both private and college level courses, which has given the band a strong command of music theory, songwriting, improvisation, vocal technique and music production skills.

This combined experience finally culminated in the release of the band's self-produced and recorded debut album, ?Once a pond, a spine??, in early 2008. The album's release, along with incessant promotion via the internet, has garnered a wider following for the band outside of Southern California, including a win on Jambands.com's "New Groove of the Month" Poll for May 2008 and an invitation to become a member band in the Home Grown Music Network, which has led to further national exposure and radio airplay. Additionally, the band has shared the stage with several national acts, including Tea Leaf Green, John Popper (Blues Traveler), Leo Nocentelli (The Meters), Bobby Vega (Sly and the Family Stone), CR Gruver (Polytoxic/Outformation), Marc Ford (Black Crowes), Steve Molitz (Particle), Banyan, Underground Orchestra, Delta Nove, Big Organ Trio, Jamie Janover, Leon Mobley, and Al Howard & the K23 Orchestra. Individual members of Quactus have also shared the stage or bill with Umphrey's McGee, Melvin Seals and the Jerry Garcia Band, Mr. Blotto, and NOFX.

Taking its cue from the classic jam bands, including the Grateful Dead, Phish, and the Allman Brothers, Quactus, has developed a diverse style that blends various genres of music. Harmonious vocals set atop shifting textures and moods, mixed with subtle meter changes, intricate melodies, and a cohesive improvisational style backed by a solid rhythm section comprise the core of the Quactus sound. Yet, their jams may run the gamut from psychedelic to trance-like to ultra-funky or even heavy metal excess. In a live setting, the band never performs a show the same way twice, often including on-the-spot composition via hand signals between band members. The band is also known for throwing in a cover tune or song tease from time to time. As a result, Quactus is establishing itself as one of the most exciting new live acts to emerge from the Southern California scene.

?Quactus makes no quacking bones about it - they draw inspiration from the biggest jam bands of our generation and beyond. If you're looking for a disc that emulates the touchstones of the genre, like harmonically intertwined guitars, open-ended jam segments, and sudden shifts in mood and tempo, then you could find a keeper in their debut, Once A Pond, A Spine.? ? Bryan Rodgers ? Home Grown Music

?'Once a pond, a spine?', the debut Quactus album is an obvious pun on the commencement to many fine tales. The band wears a few influences?Phish, the Allman Brothers Band, Frank and, yes, Dweezil Zappa and Umphrey's McGee?proudly on their sleeves on numerous tracks but, what is even more impressive, is that the quartet also writes good hooks, can rawk da funkin' house and certainly show signs of what Gordon [Seth, not Mike] said about the Phish legacy, "the songs are strong pop songs on their own. They just happen to have jamming in it." The band can also PLAY. Weiner as guitar god with three sidemen would have been so easy; on the contrary, all of the band members write solid material and play quite well?improvisationally-speaking or not.? ? Randy Ray ? Jambands.com

?Although the sound and improvisational style of Quactus draws immediate comparisons to other jam bands like Phish, the Grateful Dead, and Umphrey's McGee, other influences that are hidden somewhat deeper within the tracks include the Rolling Stones, the Beatles, Pink Floyd, Led Zeppelin, Metallica and Slayer.? -- Flagstaff Live