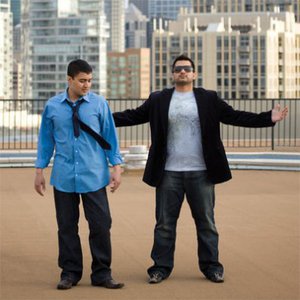 Qissmet, pronounced Kiss-met, is a term derived from Turkish and Persian decent meaning fate or destiny. It was definitely fate that brought together two kindred spirits of musicality and authenticity, known as Qissmet, Asad Khan and Shobe Khan. Qissmet was a word created by the two friends to highlight both their American and Eastern heritage. It was in 2004 that the two discovered their musical commonalities and discovered a winning combination whose catchy, flowing lyrics dropped searing notes.

Building upon unrefined vocals and experimentations of drums and other instrumentations, Qissmet sharpened their skills year by year and note by note. As their collaboration began they were able to create new opportunities to have their music expressed to the world and possibly change minds and open hearts with their gift. According to Shobe, one half of Qissmet, he strongly believes in the conviction of their work, ?our music has substance and groove to it.? Flowing diverse songs that pull the listeners in to the vibe of Qissmet is what has kept this unparallel group on the eyes of die-hard fans who have embraced the music enthusiastically. In the vein of musical genres like R&B, Hip Hop, and Pop artists; Qissmet has developed a sound to align them with musical geniuses that remain at the top of the charts. Never doubting the divine light streaming between their lyricism and the powerful engineering, Qissmet is excited to bring to listeners a new flavor and harmonious funk. Their sound is enriched with lyrics that will give them international appeal. Qissmet's silky voices and evolving stage presence has garnered the attention of many venues, showcases, and concerts in Chicago. Some of their performances were witnessed at but not limited to: the Paramount Theater, the Hyatt Regency Hotel, The Sears Center, the Gateway Theater, & the Rosemont Convention Center. Qissmet has given voice to not only thumping catchy beats or laid back party songs, but also songs about change, love, and harmony. Their breakout single, ?Payback?, is gaining quick momentum and is expected to hit airwaves this summer. With effortless consciousness and undeniable realism as the barometer to the tuneful beats of their songs; Qissmet are on the cutting edge of bringing back the most needed creativity in an industry thirsty for new melodies, harmony, and true talent.