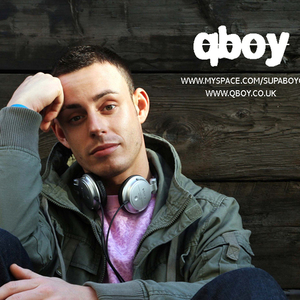 The UK's hottest leading gay rapper QBoy is not shy by any means and at the age of 25 exudes confidence and a cute cocky nature that is both sexy and witty, prominently displayed in the title of his debut EP release that covers the humour, attitudes and experiences of the "half Essex, half Spanish but 100% queer? rapper. Basildon-born QBoy started his homie-sexual career 3 years ago after completing his degree when he hooked up with scratch DJ and webmaster mistermaker who at the time had just started his gayhiphop.

Basildon-born QBoy started his homie-sexual career 3 years ago after completing his degree when he hooked up with scratch DJ and webmaster mistermaker who at the time had just started his gayhiphop.com website. QBoy, a long time hip-hop fan and street dancer assumed the role of editor and worked as the chief journalist interviewing artists like Terri Walker, Princess Superstar, Blu Cantrell and Mark Ronson whilst promoting the gayhiphop.com brand through TV, press and setting up links with record companies for reviews features and competitions. QBoy has created much of what gayhiphop.com is today.

A year after this point, DJ and club promoter NineBob contacted QBoy to review his Brighton based gay hip-hop night Pac-Man. Along with mistermaker, QBoy met NineBob and his team DJ Gideon and fashion artist NOKI and the lads have been working together ever since. QBoy saw perfect opportunity to use the club and website to promote each other and proceeded to ensure that the Pac-Man/gayhiphop.com brands were placed everywhere possible, creating a press and co-promoter role for Pac-Man which proved beneficial to all. Now also a DJ for Pac-Man, QBoy's rap collection was put to good use when the club moved to London's Electricity Showrooms venue and regularly featured at The End's popular 'Discotec' night.

However it was his involvement with gay hip-hop collective Q-Fam that began crafting his talent to rap. Q-Fam initially formed by QBoy, mistermaker and Ill Form, the latter two subsequently replaced by Fontaine and Dark Angel, were front-page feature for gay publication The Pink Paper. QBoy had gained press and TV for gayhiphop.com and Pac-Man in the past but it was this cover showing QBoy and mistermaker looking staunched with 'Batty Boys' plastered across their faces that had
organisations tripping over themselves to book Q-Fam. After a successful run playing Leicester, Birmingham, Brighton and EuroPride in Manchester, QBoy realised his potential. With fanmail from not only the UK but stateside too thanks to a glorious feature in XY magazine, QBoy knew the demand and that people wanted to hear more of him and so comes the creation of his debut release.

Out independently on 'Ain't Nuffink Butt F*ckin Music', the EP brings a needed rush of fresh air to the current saturated hip-hop scene. The UK has yet to have an openly gay rapper so prominent in the media, producing and performing material making QBoy the first and by default most successful to date. His sexy image serves him well; having an appeal to not only gay men but straight women too, QBoy would dare say straight men as well!

QBoy covers many angles on his five-track set. His fond use of the word 'faggot' could give Eminem a run for his money, while his tongue-in-cheek rhymes may have you blushing and laughing all at once. On the self-titled 'Q.B.O.Y.' gets to grips with the negative attitude he receives from the gay community for his love of hip-hop ending in a witty battle rhyme to knock any opponent out. 'Bent Spittin' a cover inspired by Rah Digga's 'Straight Spitting' has QBoy laying it down with a head knocking rhythm. 'New Era' an introduction to Q-Fam, features members Fontaine and Dark Angel over a heavy dub laced beat ending with QBoy's memorable verse. The first single '? Life Crisis' takes QBoy away from his male-Lil' Kim image and into a more personal, intelligent and spiritual realm as he lets loose his feelings about life and re-evaluating things around the age of 25, and is produced by and features gay UK soul star Wayne Latham.