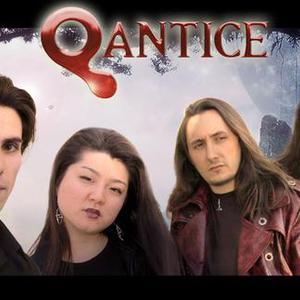 With it's debut album ?The Cosmocinesy?, QANTICE is leading us into the maze of a futuristic tale where each track is a fiery painting of Symphonic Metal. The fanciful compositions allow the expression of many classical or celtic musicians within epic and spirited movie-like orchestrations. In this album, virtuoso guitarist Tony Beaufils delivers the result of more than seven years of original and meticulous artistic work.

Having notably gathered the enchanting voice of Vince (Agone Angel, Lands Of Past) and the talented violin of Yosh Otias (first violin in the French symphonic orchestra "L'Odyss?e Symphonique"), QANTICE also benefited from the confirmed producer skills of Kevin Codfert (Adagio, Venturia, Myrath...).
Thus, with this first album of unbridled imagination and technique, QANTICE is inviting all the fans of Rhapsody Or Fire, Angra, Stratovarius, Avantasia, Yngwie Malmsteen or Kamelot to discover new skies and be carried away by new worlds..

In 2002, after several years and hundreds of concerts performed as member of the celtic/prog/rock band TornaoD, Tony Beaufils (electric, accoustic and banjo guitar - also ex Now-L?dge, Mindrage and Krozal) goes back to his first and favorite genre : symphonic heavy metal. Qantice is founded and will soon include Ephrem Charmois (drums) and Yoshika Saito (violin, first violin in the "Odyss?e Symphonique" Orchestra).
From the first compositions, Qantice puts together classical, traditionnal and various other influences into an original epic sci fi/fantasy metal.
The celtic instruments (Flutes, Ulean Pipe, Bohdran...) are played by his mates from TornaoD and from the Naheulband (a parodic medieval/celtic/folk band, very famous in the francophon roleplayers world, where Tony performs a heavy-metal-banjo-playing orc) music .

In 2005, Vince (also singer in Lands Of Past and ex Biomech Race) joins the band as lead vocalist.

2006 will see the release of a second demo, preparing an album that will be mixed in October 2007 by Kevin Codfert (Keyboard from Adagio, ex Biomech Race, also mixed Venturia's "New Kingdom")

November 2007, the first album "The Cosmocinesy" is mastered at HOFA in Germany.