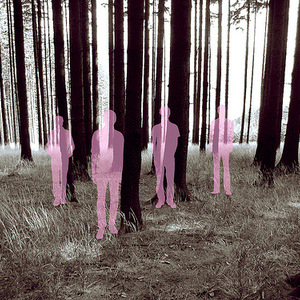 There are six different artist with same name: 1) Pyramids (Denton, Texas) An experimental band combining elements of black metal, shoegaze, industrial, ambient and noise. They released their debut album in 2008, followed by cooperative releases with Nadja, Horseback and Wraiths and the box-set WVNDRKMMER, a collaboration with 52 different artists. Due to their highly collaborative nature, they have yet worked with artists like Jesu, Blut aus Nord, lovesliescrushing, Ulver, Lustmord, This Will Destroy You...

An experimental band combining elements of black metal, shoegaze, industrial, ambient and noise.
They released their debut album in 2008, followed by cooperative releases with Nadja, Horseback and Wraiths and the box-set WVNDRKMMER, a collaboration with 52 different artists.
Due to their highly collaborative nature, they have yet worked with artists like Jesu, Blut aus Nord, lovesliescrushing, Ulver, Lustmord, This Will Destroy You, Burial Hex, Fear Falls Burning, Bass Communion as well as members of Krallice and Kayo Dot, to name but a few.

Pyramids formed in late August 2005 after three long-time friends, who had played with one another for many years in A Petal Fallen, found a house in Philadelphia and decided to write music together again. Living together in the Veggieplex Theatre and being largely unemployed, we found a lot of time to practice, ended up playing our first show only a few weeks after beginning to write, and began recording a full-length only a month after conceiving the band.

As we were finishing the recording of our record Following the Tracks, Forcing Motion Through Phases, we played a lot of shows and had a lot of fun, but upon its completion Chris decided Philadelphia was not for him and moved back to Seattle, followed shortly thereafter by Eric. With a three-week tour on the horizon and only one person left to play it, Larry and Daniel decided to help out and we took Pyramids on the road with only 1/3 of its original members, even writing some new songs (for the Devices split) in the process.

At the moment Pyramids has found permanent membership in Sean, Dave, and Benn, and is nearing completion of a new LP, Through the Hourglass. Following is already out of print in its LP form, and will hopefully be repressed soon, to coincide with our upcoming split 7"s. In a month or two we should be recording for yet another split, this time with our tour partners from last year, Capsule.

One of the last surf bands to emerge, the Pyramids were one of the best marketed. Formed circa 1961, the Pyramids formed in California and was comprised of Skip Mercier (Lead Guitar), Willy Glover (Rhythm Guitar), Steve Leonard (Bass Guitar), Tom Pitman (Saxophone), and Ron McMullen (drums). When their initial single "The Pyramid Stomp" fizzled nationally, the group's bassist Steve Leonard decided to analyzed the Chantays' "Pipeline" and came up with a clever variation of that opening reverb riff. In early 1964, The Pyramids made the Top 20 with "Penetration, helped by the promotion of John Hodge, the group's manager. The Long Beach, California group achieved some notoriety after Hodge convinced them to shave their heads just as the British Invasion and became "America's answer to the Beatles." During their concerts they'd wear Beatles wigs which they would throw to the audience halfway through the show revealing their bald heads. Hired girls would then storm the stage. Other gimmicks were arriving at a job on elephants or in a helicopter. The gimmicks worked and they were soon appearing on Bandstand and Hullabaloo and in the beach movie Bikini Beach. Hodge wasn't as good at investing the money as he was at helping them earn it. After several bad investments they disbanded after recording one album and a few non - hit singles.

The Pyramids (also known at various stages of their career as The Bees, Seven Letters and Zubaba) were a ska and reggae band from the United Kingdom, originating in the late 1960s when Frank Pitter and Michael Thomas founded the band as The Bees. The band's name was originally spelled Simaryp, which is an approximate anagram of the word pyramids.[1] Consisting of members of West Indian descent, Symarip is widely marked as one of the original skinhead bands, being one of the first to target skinheads as an audience. Their style of music became known as skinhead reggae, and their hits included "Skinhead Girl", "Skinhead Jamboree" and "Skinhead Moonstomp", which is based on the Derrick Morgan song, "Moon Hop".

They moved to Germany in 1971, performing reggae and Afro-rock under the name Zubaba. In 1980, the album Skinhead Moonstomp was re-issued in the wake of the 2 Tone craze, hitting the UK pop charts for the first time. The band officially split in 1985 after releasing the album Drunk & Disorderly as The Pyramids. The album was released by Ariola Records and was produced by Stevie B. Trojan Records released a best of album in 2004 with a new single, "Back From the Moon", performed by two former band members, Monty Neysmith and Roy Ellis.

In 2005, Neysmith and Ellis performed together at Club Ska in England, and a recording of the concert has been released on Moon Ska Records as Symarip - Live at Club Ska. In April 2008, they headlined the Ska Splash Festival in Lincolnshire as Symarip, and later performed at the Endorse-It and Fordham Festivals. Pitter and Thomas now perform in a different band as Symarip/Pyramids, and starting in autumn 2008, will perform on the their Back from the Moon Tour 2008-2009, along with The Pioneers.