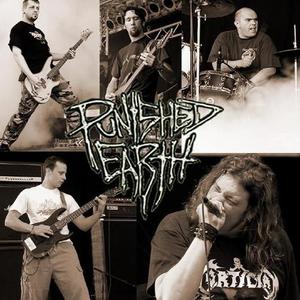 Put together by remaining members of RISING NATION, who gained a certain following as well on the national than on the international scale, PUNISHED EARTH saw the light in the end of March 1997. Their major aim is to crush down the masses with their infamous, brutalizing music. The concept of PUNISHED EARTH appeared to be pretty much end-time oriented, lyrics mostly relating on what they see all around, and this is far of being nice.

The music is a blend of different brutal music ranging from hardcore to grind/noise over death and industrial with an open door to all other styles of brutal music ... The line-up in the beginning was Fred (vocals), Axel (guitar), Tanya (bass) and Horst (drums). In November 1997, a first gig was played on the birthday party of their vocalist in front of a hand full of kids, mostly knowing nothing about grinding music. In February 1998, they record a first 10 tracks tape in "The Fridge", their rehearsal place, on a 4 track machine with the help of Francis Habets. On 20th May 1998, they had the incredible opportunity to open for the US deathgrind legend MORTICIAN on their first gig in Ludwigshafen (Germany) followed by a live appearance on the WEE LEWAAT festival in August 1998. In October 1998, Horst (drums) decide to quit and leave the band. A new drummer is found on the same day in Manni - a more than worthy replacement. In February 1999, a second 8 tracks tape is recorded again in "The Fridge", and again with the help of Francis Habets. With this piece of shit, they gain some more attention in the underground and UXICON records approach them with a one-cd deal. In June 1999, the band decide to split ways with Tanya mostly due to her lack of time and interest.They rehearse a few bass players but none did fit. As no reliable bassist could be found, they decide to go on as a three piece, doing new songs and hoping to find some day a worthy replacement for Tanya. The line-up then is Fred (vocals, sampling), Axel (guitar and bass) and Manni (drums). January 2000, the band enters the Underworld Recordings Studios in Lemiers (The Netherlands) to record their debut cd "Frankenstein".This album is officially released in August 2000 on Uxicon. In May 2000, finally, after a long quest, they thought would never end, they find a bassist in the person of Patrick, who was busy playing in some crapy wannabe-brutal cover bands. The line up then is and still is Fred (vocals, sampling), Axel (guitar), Manni (drums) and Patrick (bass). The release of the debut album is followed by some great gigs opening for bands like AGATHOCLES, MY MINDS MINE, REPUGNANCE, LAST DAYS OF HUMANITY, WORLD DOWNFALL, INTESTINAL DISEASE, SUBLIME CADAVERIC DECOMPOSITION, INGROWING, KADATH, ILL FARES THE LAND, SUHRIM, CARNAL FORGE, MORTICIAN (again), INHUMATE, MALIGNANT TUMOUR, MUCUPURULENT, CRIPPLED BASTARD, HOUWITSER, PREJUDICE, MAGGOTS, BOILING REMAINS, and much more. In October 2001, the band enters the TRANSPUNK studios to record a follower on "Frankenstein". The result is a seven track audio violence nightmare entitled "RUINED EMPIRE". It unfortunately took more than a year to be released. In that time, Axel showed more and more uninterest for the band. After a longer time of uncertainty, he left Punished Earth in 2003. As more than replacement we found Ludo and Val shortly after. As a five piece, Punished Earth recorded a few songs for the release of a split cd-r together with BOILING REMAINS. In December 2005, Manni decided to leave the band due to a lack of time to follow up. As the band had some gigs to be played, they asked Earl (formerly drumming in KADATH) to help out on these performances. As he enjoyed the whole stuff and did some great work at the concerts, we decided, in mutual agreement, to go on working together. In march/april/may 2006, the band entered the TRASH CAN studios in HC again to record the tracks for our long projected third cd recording "CORPORATE DICTATORY". This one has been selfreleased in october 2006. In december 2007, they recorded 9 new tracks which were released as split cd together with ANAL PENETRATION (NL). In the beginning of 2009, they did some new studio recording which should have been released as split cd with BLOODRAISED(IT) around autumn of 2009 on F.D.A. REKOTZ. This split was cancelled by the label in january 2010. As they wanted this material to be released as soon as possible, they decided to release the 15 unreleased tracks as a Mcd entitled "RHAPSODIES OF DECAY". They first projected to put it out as a self production, as they did with "CORPORATE DICTATORY", but the Belgian label ROTTEN TO THE CORE showed some interest and took it over. In this time, Pat left the band for several different reasons. They decided that Ludo would take over the bass part. The current line-up is Fred (vocals), Earl (drums), Ludo (bass & guitars) and Val (guitars).