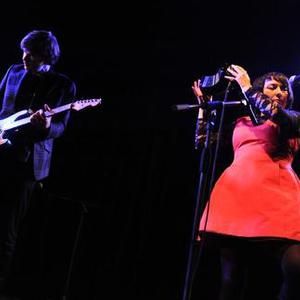 Pumajaw are Scottish singer/songwriter/musician Pinkie Maclure and English musician/programmer/producer John Wills,, a long term member of UK art-rock band Loop . . Demonmeowmeow was released on Nov 7th 2011. A new album is scheduled for spring 2013. Although associated with the folktronica scene, the duo has evolved into something altogether more intense and cinematic, characterised by exploratory sounds and timeless, lyrical songwriting.

In 2012, Nicola Meighan, in Glasgow's Sunday Herald, wrote 'You wonder if the neighbours know about them in the local shop. About Maclure's late-80s tenure as a contemporary of Bjork and PJ Harvey; about her fleeing Banff for France on the back of a teenage Jacques Brel fascination (she is still drawn to Paris); about her extraordinary voice ? parts Juliette Greco, Lydia Lunch and Ella Fitzgerald ? a voice that would, in a better world, deliver the greatest Bond theme ever.
You wonder if they realise that Wills ? once of psychedelic drone-rockers Loop ? is possessed of an uncanny knack for bewitching atmospheres and ritualistic beats. Or that the duo's alliance has won them fans from Radio 3 to Marie Claire (who decreed Pumajaw ?disarmingly beautiful?).

They've also recorded as Lumen and under their individual names