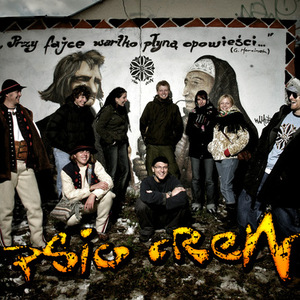 Psio Crew is a project, mostly musical, which has been making their experiments since 2004. It is formed by highlanders, musicians, fans and lovers of Beskid folklore. Their traditional mountain melodies and singings are mixed with spacious electro, which helms, knobs and other DJ's stuff are in hands of Dobry Gooral, gave birth to a new, genuine sound, hard to find on club stages. Breaking stereotypes, fusion of these stylisticaly different music worlds is proposal for everyone, who are open for specific, positive, often wild interpretation of Beskid music.

It contains such music sorts as: d'n'b, electro, hip-hop and raggamuffin. The whole repertuar is also filled with jazz climates and magical female voices.