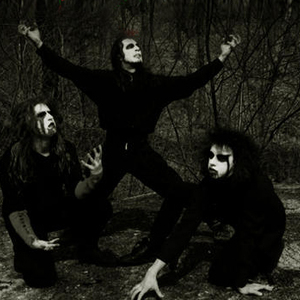 The year was 1989, Aragon Amori, Paul Ledney, Brett Makowski and John McEntee joined forces to form a Death Metal act by the name of INCANTATION. Prior to INCANTATION, Aragon and Brett were involved in a band called BLOOD THIRSTY DEATH, while Ledney and McEntee played in REVENANT. Due to artistic differences, Paul, Aragon and Brett left the band to form PROFANATICA the following year. Influenced by such classic cults as VENOM, NECROVORE, SARCOFAGO and BATHORY, the unholy trinity together had a passion to create raw and sacrilegious Black Metal.

In the summer of 1990, they unleashed their first demo entitled "Putrescence Of..." After receiving much praise in the underground from this tape, PROFANATICA released a second demo called "Broken Throne of Christ" in December of the same year. Brett Makowski was unable to participate in the recording of this demo, so the band recruited an old friend John Gelso to join to fill in on guitar. John was previously involved with Paul in the Black / Death band TOTEN during 1987-1988. Both demo tapes eventually caught the interest of After World Records and PROFANATICA signed a deal with the label. In 1991 they released the infamous "Weeping In Heaven" 7" EP, strictly limited to 500 hand-numbered copies. Following the success of this EP, After World chose to re-release it on cassette with two bonus live tracks the following year. Also in 1992, the band signed a deal with the French Osmose Productions (a fairly new and uprising label at the time) to release the Tormenting Holy Flesh split 12" LP/CD with the Colombian band MASACRE.

During this time, PROFANATICA extensively toured the North Eastern United States, often shocking many with their sick and blasphemous live act. As the end of the year approached, both guitarists officially left the band. Paul and Aragon invited their close comrade Wicked Warlock of Demonic Blasphemy (these days known as Ixithra) of the band DEMONCY, to perform the guitar work. The three of them played one gig together, and were planned to participate in an American Black Metal festival that Halloween appearing with ORDER FROM CHAOS, VITAL REMAINS, ACHERON, etc. However, this gathering unfortunately never took place. Instead, they entered the studio together to record a full-length PROFANATICA release initially entitled "The Raping Of The Virgin Mary". Sadly, the master tapes of these recordings were destroyed in the studio (there are conflicting stories about this), and the band parted ways quickly after. By then Osmose Productions had also re-released the bands first demo on a 7 EP entitled "As Tears Of Blood Stain The Altar Of Christ".

Paul formed HAVOHEJ in 1993 with some assistance from Brett Makowski on bass and guitars. Aragon and John Gelso pursued the Black / Death project CONTRIVISTI until Aragon's untimely death in 1996, and Wicked Warlock continued on with DEMONCY, who are still very much active in the American Black Metal underground to this day.

In 1999 the underground U.S. cult label Samhain Productions broke silence with the "Unholy Black Death" split 7 EP with Singaporean cult IMPIETY. This limited pressing of only 500 copies featured unreleased tracks from a 1991 rehearsal and the final studio sessions. By early 2001, Paul Ledney recruited two new members and resurrected the black cult of PROFANATICA. Paul soon released on his own label Necroscope Productions, the Live CD consisting of three live PROFANATICA performances from 1991-1992. This same year, the now defunct War Hammer Records released the Collection on CD and a 12 Picture Disc edition under Necroscope Productions soon followed. Shortly after the band had recorded two brand new blasphemies and released the Broken Jew/Fuck the Messiah 7 EP on Metal War Productions in 2002. A 7 single crowned Passion Of A Liar was also recorded and to be unleashed on Supreme Art Productions although never surfaced.

In 2006 Paul and John reformed Profanatica with a plan to release the first LP titled Profanatitas de Domonatia due out April 30, 2007 on Hells Headbangers records. The LP was created with the mindset to continue where the band left off in 1992 when Paul and John split from the band. Plan for more Profanatica releases within the year.

The Curling Flame Of Blasphemy

As Tears Of Blood Stain The Altar Of Christ (EP)