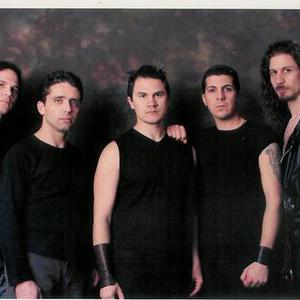 Prodigal Earth was formed around 1990 under the name Gangland in the island of Cyprus. Most of the members participated in the legendary Autocrash formed around 1989. Ganglands original members were Socratis Leptos, Nicholas Philippou and Antonis Mavrou. At first, vocals were performed by Socratis but it was obvious that the band needed a singer so that Socratis could concentrate on the guitar. Thats when Nicholas Leptos (Socratis brother) singer with Autocrash (Autocrash and Gangland co-existed for a period of 2 years approximately) stepped in.

Bass was performed by either Socratis or Antonis. Gangland started by covering famous Iron Maiden songs and then moved on to trying Ozzy Osbourne, Deep Purple and Metallica covers. In time, they began writing their own tunes. The main song-writer at the time was 14-year-old Socratis! (Some of the tunes he wrote then, made it to the first Prodigal Earth album!). The band gave many concerts around the city and it was obvious that the chemistry was there from the beginning. Of course when most of the band members turned 18 they had to complete their army duties. Thats when the band was put on ice. The army and studies were the basic reason why the bands activities were suspended but not before they managed to record their first demo Will to live. It was a very straight-forward melodic metal demo that showed that the band can write good songs and make itself known to the underground scene. This break went on for about 10 years!! In 2006 Nicholas Philippou and Nicholas Leptos decided to call Antonis and see whether there was ground for re-forming the band. Antonis was keen and so was Socratis. Long-time friend and music associate Paris Lambrou who was at the time playing in another band with Nicholas (the singer) joined the band as the official bass player. So the band began rehearsing again, started writing new songs and changed the name to Prodigal Earth. After 2, 5 years of rehearsing, the band finally released its debut album Zenith II Zero. It contained most of the songs from the 96 demo, plus some great newer and more modern songs. This combination of the older classics (rejuvenated and rearranged to fit the modern traits) and the new tunes is what gave Zenith II Zero its own unique character. Ranging from classic heavy metal to power and from power to heavy rock, Prodigal Earth are the masters in finding the right melodies, both in music or vocals. Songs like Broken world, Crossroads, The young ones and Lonely gods are already fan-favorites.
At the moment, Prodigal Earth is in the song-writing period for their sophomore effort. All the members of Prodigal earth have their own side projects, a fact that shows their endless creativity and love for music and their need to satisfy their thirst to explore every aspect of the music world, parallel to Prodigal Earth. They have matured as song-writers and as musicians and the second album is expected to lift them to the top and establish their name as one of the best acts of the island.