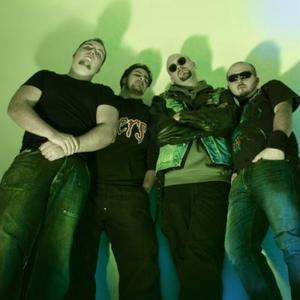 The project Ancient Dome was created in 2000, thanks to the will to play heavy metal, by Paolo Porro (Guitars), Gabriele Borghi (Guitars) and Matteo Cuzzolin (Bass Guitar). Salvatore Siragusano (Drums) joined the band the same year. At the beginning, the proposal was much more concentrated on classic metal, until it finally came to the construction of a new sound based on the Bay Area Thrash, but also debtor to the other influences of the members.

We try to recreate the atmospheres of bands like Metallica, Megadeth, Heathen, Testament, Coroner, Forbidden, Slayer, Exodus, Overkill and so on, mixing the thrash sound with a little bit of melody.
In 2004, before the recording of the first demo "Once Were Thrashers", Gabriele decided to leave the band, being replaced by the actual lead guitar Alessandro Fontana.
In 2005 Ancient Dome recorded their first EP, which obtained good responses from the reviewers, but first of all from metalheads, who started to follow and support the band.
In 2006/2007 the band began to play live continuously, supporting great realities from italian underground.
In June 2007, Salvatore decided to quit the band for personal reasons, and now Giorgio Alberti is behind the drum set.
In November 2007, Ancient Dome started the recording session for the debut album, entitled "Human Key", out the 15th of January 2009 for the italian independent label PUNISHMENT 18 RECORDS.
Be prepared for the thrash attack!!!

Perception Of This World