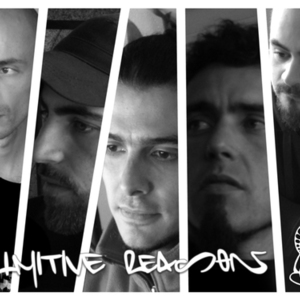 From intense grooves and mellow moods to hard hitting power, Primitive Reason takes you on a sonic voyage to a concrete jungle that lies somewhere beyond the typical rapcore/altmetal/rockreggae clouds. 'Cast The Way' is the latest genre-bending offering from this transnational band (of American, Spanish, and Portuguese backgrounds) and is the reflection of the diverse cultural and musical influences of its members.

'Cast The Way' was recently made available exclusively on-line through the band's websites and is Primitive Reason's first release with the revamped line-up that now includes Pepe de Souza (drums) and Ricardo Barriga (guitar), both of whom recently joined De Llera and long time band-mates James Beja (bass) and Abel Beja (guitar). This self-produced ?Limited Edition' EP is a prelude to Primitive Reason's 6th album which is due for international release in the fall of 2008, year in which the band will be celebrating 15 years of existence. Unlike their previous albums (which featured multi-instrumental additions such as horns, percussions, acoustic guitars, etc.), the band decided to take a more ?back to basics' approach for this recording. The result is a no-frills, eclectic, and extremely potent offering from the innovative Lisbon, Portugal, based rock quintet.

For over a decade, Primitive Reason have remained true to their roots and ideals. Their innovative sound and powerful live concerts have generated many fans on the international underground music scene. Since 1996, the band has released five studio albums and toured throughout Portugal, U.S.A, United Kingdom and Spain. The band has also performed at many summer music festivals and shared the stage with an extensive list of international bands including System of Down, Tool, Audioslave, Marilyn Manson, Incubus, Deftones, and Prodigy, to name a few. Backed by a faithful and ever-growing cult following throughout many parts of the world, Primitive Reason continues to cast the way...

Based in Lisbon, Portugal, Primitive Reason was formed in 1993 by Guillermo De Llera (bass,vocals) and long-time schoolmates Jorge Felizardo (drums) and Brian Jackson (lead vocals), who were later joined by Mikas Ventura (guitar) and Mark Cain (sax). The members, being of different nationalities (including Spanish, Portuguese, American, and British backgrounds), set out to explore their diverse musical interests. After a couple of demos and several live shows, the band began to develop a unique fusion of metal/hardcore/ska/reggae/hip-hop/funk with hints of jazz and world music, complimented by dual vocals that mixed melodic singing with rap, spoken word, and aggressive screams.

Their innovative sound and impressive live performances caught the attention of both local fans and media alike. In 1995, Primitive Reason landed a national recording deal with Uniao Lisboa. The band quickly made its mark on the national music scene with the release of two critically acclaimed albums in Portugal ('Alternative Prison' (1996) and 'Tips and Shortcuts' (1998), both of which sold over 20,000 copies). After several successful national tours, including memorable performances at important summer festivals like Paredes de Coura, Superbock Superrock, and Vilar de Mouros, the band had generated a large national following and was looking to further its musical experience beyond borders.

Frustrated by their label's lack of interest in releasing their albums internationally, Primitive Reason re-located to New York City where they signed with independent label Jah Notion in 1999. The move was not without its hardships though. By the time they started writing new material for their U.S. debut, De Llera and Felizardo had found themselves at a major crossroads after the rest of the band had decided not to continue. The duo moved on though, with De llera taking on the lead vocal role, completing the band's third album, 'Some of Us', which was recorded in NY and featured some friends they had made on the scene including members of the Scofflaws, Toasters and New York Ska Jazz Ensemble.

At the turn of the century, the band recruited local natives James (bass) and Abel Beja (guitar) and quickly became a fixture on the NYC circuit, playing such renowned venues as CBGB's, Mercury Lounge, Knitting Factory and Wetlands. To kick off their first U.S. release in the summer of 2000, Primitive Reason embarked on several U.S. national tours, included opening slots for major acts such as Fishbone, The Urge, The Misfits, Murphy's Law and The Pilfers, before returning to Portugal in 2001 to promote national release of the album. Another year of constant touring was to follow, including a national head-lining tour and appearances at major summer festivals alongside international acts such as Soulfly, Rammstein, Manu Chao, Suicidal Tendencies, UB40, Slipknot and Nickelback. The band then took a break from touring and decided to explore their individual and collective interests in other musical roots and cultures. Each member traveled to a different part of the globe: to Asia, South America, North America, and Europe. These experiences would deeply inspire their following works.

In 2003, a ?reincarnated' Primitive Reason finished recording what was to be the band's first release on their own independent label Kaminari Records. 'The Firescroll', the band's 4th album, generated rave reviews with the public and media alike. Their national tour included an appearance in front of 30,000 fans at the Rock in Lisbon stadium festival alongside Marilyn Manson, Audioslave, Deftones, and Disturbed. Video-clips for the singles Kindian and Had I the Courage were voted #1 ahead of top international acts on several TV programs, and Primitive Reason was nominated for Best Band at the 2003 MTV European Music Awards. By the end of summer, Primitive Reason had suffered another major line-up change with the sudden departure of Felizardo. The band was able to find a temporary replacement and finished the last leg of the national tour but was forced to cancel any plans of international touring.

Over the next few years, the band found themselves faced with a ?revolving door' of replacement drummers as they continued to tour nationally. This didn't stop them from returning to studio to complete their next album. 'Pictures in the Wall' (Kaminari, 2005), Primitive Reason's 5th release and most adventurous work to date, was the reflection of the diversity that characterizes and always has been a trademark of this unique band. The album was conceived as a 74-minute ?soundtrack' to a short-story written by De Llera. As he explains it, ?The book, and the music that accompanies it, describes a deep sleep, in which several distinct dreams tell their own story, filled with hopes and desires, living on memories and suffering through its own sorrows, like a wall filled with photographs that seemingly mark the passage of time?. Originally written in English, the book also includes both Spanish and Portuguese translations.

Following the release of?'Pictures in the Wall', Primitive Reason toured consistently. Highlights included their first concerts in the UK and Spain, as well as festival appearances alongside Tool, System of a Down, Placebo, Prodigy, Deftones, and Incubus. Both Kaminari releases were then made available worldwide through CD Baby, Super D Distribution and all major digital music services including I-tunes and Napster. In 2007, with the additions of Pepe de Souza (drums) and Ricardo Barriga (guitar), Primitive Reason solidified their line-up and returned to the studio. Their first recordings were recently released as a ?limited edition' EP, anticipating the band's 6th full-length which is scheduled for international release in mid 2008.

Since the beginning of their 15-year existence, they've remained faithful to their roots and ideals while consistently re-affirming their position as one of the leaders on the international underground music scene. Backed by a faithful and ever-growing cult following throughout many parts of the world, Primitive Reason continues to cast the way?

Pictures In The Wall