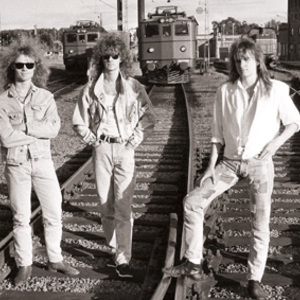 Pride is the name for more than one artist. 1) Pride (1970) was a studio project produced by David Axelrod. A folk-psyche album with Noony Rickets (of Love) on vocals, and a band of L.A. Studio musicians (including Don Randi). All songs were written by Axelrod's son Michael Axelrod. 2) PRIDE is the 2001 melodic Rock group founded by erstwhile BALANCE OF POWER keyboard player Ivan Gunn. Drummer Rik Eade was previously a member of BARRETTA.

2) PRIDE is the 2001 melodic Rock group founded by erstwhile BALANCE OF POWER keyboard player Ivan Gunn. Drummer Rik Eade was previously a member of BARRETTA. Not to be confused with the other British PRIDE that released the 1995 'Another Fine Mess' album. German label Point Music issued the 2001 debut 'Far From The Edge', followed by the AOR Heaven released 'Signs Of Purity' in 2003. Line-up changes would see the exit of Gunn.

In April 2005 the band added former CONTAGIOUS and VAUGHN guitarist Tony Marshall. That October the group announced it was to fold, stating "with the decline of the Melodic Rock scene over the last few years, it has become increasingly difficult to find record companies willing to front the necessary money to finance quality albums." PRIDE announced their swansong performance was to be at the 'Melodic Rock Xmas Bash' at the famous Ruskin Arms venue in East London on December 4th billed alongside SACRED HEART, LOST WEEKEND, PAUL HODSON, THE DREGS OF SOCIETY and ESCAPE.

3) Pride is a Hardcore Punk band originating out of Centralia, Washington formed in 2011 by Jesus Martinez, Spencer Blosl, and Sam Payne. They have released one EP called America Is Dead.

Far From the Edge