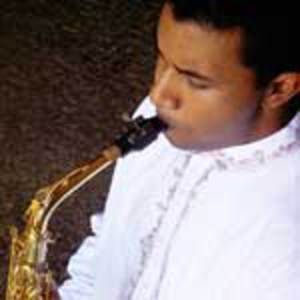 Prasant Radhakrishnan is a versatile saxophonist identified with both the South Indian Classical (Carnatic) and jazz disciplines. The unique vocal texture of his sound on saxophone, noted for its expressive complexity and rhythmic ingenuity, reflects Prasant's continued study of tradition, constant innovation, and vast concert experience. The foremost disciple of Carnatic saxophone pioneer, ?Padmashri? Dr.

The foremost disciple of Carnatic saxophone pioneer, ?Padmashri? Dr. Kadri Gopalnath, Prasant began developing his music over the course of nearly a decade of intensive musical training under his guru, much of which took place in the traditional gurukulam format of complete immersion. Since his ascent to the concert stage in 1998, he has accompanied his guru in hundreds of concerts, and has established himself as a unique and formidable voice in Carnatic music.

Prasant's musical trajectory reveals his deep musical curiosity and constant evolution within the Carnatic tradition. At age 17, Prasant released his first album, Swara Sudha (2000), featuring some of the most respected names in Carnatic music. After an intense period of study, practice and performance in India under the aegis of the prestigious AIIS Senior Performing Arts Fellowship, Prasant released his second critically acclaimed album, Duality (2004), which displayed the subtle technical innovations he had begun developing for his instrument on the Carnatic platform. Recently, Prasant released a third solo Carnatic album entitled East Facing (2007), which furthers his attempt to fuse the Carnatic vocal style with the unique strengths of the saxophone.

The breadth of Prasant's musical work reflects the musings of an artistic mind trained in two disciplines and unfettered by conventional boundaries between genres. Having studied at the University of Southern California's renowned Jazz Studies program, Prasant founded the group VidyA in late 2005. VidyA has emerged with a soulful, penetrating sound that pushes the labels of ?fusion? or ?world music? by merging the virtuosity of jazz with the melodic and rhythmic nuance of Carnatic music. In VidyA's music, Prasant's multi-layered compositions infuse the classic jazz sounds of bass, drums, and saxophone with unusual melodic richness. Named among the top jazz acts for 2007 by the San Francisco Chronicle, VidyA's seamless hybridity forges new ground in the American jazz scene and serves as a liaison between the worlds of jazz and Indian classical music.

Prasant's exceptional approach to his music and instrument has been witnessed in a diverse range of venues and locations around the world: from concert halls in India and jazz venues in Japan, to concerts, cultural festivals, and lecture demonstrations all over North America. Prasant has also lectured in several universities in the U.S., including U.C. Berkeley, George Mason University and Oklahoma University. In his solo Carnatic endeavors, he has had the privilege of performing with luminaries such as M.S. Anantharaman, Guruvayur Dorai, Mannargudi Easwaran, Srimushnam Raja Rao, Poovalur Srinivasan, V. Suresh, B. Rajashekar, as well as superstars of the younger generation such as B.U. Ganeshprasad, P. Satishkumar, Embar S. Kannan and Delhi P. Sunderrajan, among others.