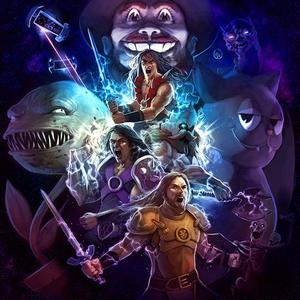 Powerglove is an instrumental heavy metal band from Arlington, Massachusetts that performs remixes of video game, cartoon and movie theme music. They currently have three releases, the EP entitled "Total Pwnage," the full-length "Metal Kombat For The Mortal Man" and their latest album Saturday Morning Apocalypse. Powerglove is predominately influenced by European and Japanese power metal bands, but uses many elements from death metal, black metal and thrash.

Though the band is instrumental they have recently collaborated with Sonata Arctica vocalist Tony Kakko on two songs. The band's name comes from the name of a Nintendo product which was worn as a glove to control video games. The band's first recording was "Dr. Wily's Theme" from Mega Man 2 in early 2003, which was followed by "Storm Eagle" from Mega Man X and the theme from Mighty Morphin Power Rangers.

Metal Combat For The Mortal Man