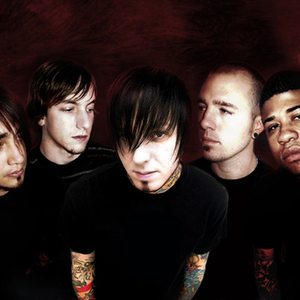 Amidst the adversity of the ever so popular parting of band members these days, Phoenix Mourning is the birth of such a trend. With each member being a part of past bands that saw lineup changes all too frequently, the five met through trial and error that eventually fell into the role of fate. Phoenix Mourning was formed around the perseverance of artists who wanted their passion and love for music to be shared on a universal scale.

Each individual member has over come so many obstacles to finally be a part of what they considered to be the same vision. Creating music that thrives on the emotions that ultimately speak as a novel to their lives and being blessed with the ability to share such a story, while never compromising integrity and always pushing each others art forms to the limits. "Admittedly, this is a calling of sorts, we do this because the five of us feel this is what we are supposed to be doing."

With touring in the near future, they look forward to coming to each and every city and meeting new people on the road daily. Phoenix Mourning absolutely thrives on an intense live show that promises fans to be something to always remember. "Nothing else compares to the feeling of taking the stage and bringing this 'story' you have written for people in the form of music, directly into their lives." When you have connected with a crowd and have had an amazing show, its pretty much an unbeatable feeling.

This is just a little information about Phoenix Mourning and why we do what we do. But it is far too often that a bands bio is summed up in a few paragraphs and we can not possibly do that. The truth is music is an art and can not be summed up in a "stock" biography, instead it is something that needs to be seen and heard to fully understand where the artists is coming from. The artist's depiction of what he creates will always mean something different to each and every person who hears and sees it, and the unique experience you take from it is priceless.

Brought to the label's attention by legendary producers Tom and Jim Morris, who have worked with everyone from Marilyn Manson to Puff Daddy to Sepultura to Ozzy Osbourne to Public Enemy, PHOENIX MOURNING's thirteen-song debut oozes with track after track of spot on metal/screamo arena worthy anthems of youthful angst and personal discovery. Rarely does a debut album showcase the characteristics usually associated with seasoned recording and touring acts.

PHOENIX MOURNING's Metal Blade Records debut, ?When Excuses Become Antiques? is the exception to that rule. Creating music that thrives on the emotions that ultimately speak as a novel to their lives, the members of PHOENIX MOURNING have been blessed with the ability to share their personal stories through well crafted and expertly performed songs. Album standouts include ?A New D?cor?, ?From Afar? and ?Waiting for the King?.

Destined to be one of the breakthrough releases of 2006, PHOENIX MOURNING has already become a ?friends? favorite on MYSPACE and PURVOLUME, where, in a very short amount of time, the band continues to cultivate supporters at an alarming rate.