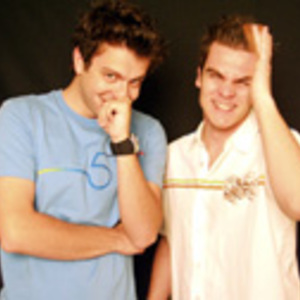 Producers & DJs Phatjak have lately exploded into the electronic music scene generating a lot of buzz with their peak time funky electro-prog productions. With 10 releases and more than 12 remixes, during the last year, Phatjak have got the attention of Nick Warren, Dave Seaman, John Digweed, Anthony Pappa, Steve Lawler and many more. It all started when Dave Seaman's label Audio Therapy released Dirty Sunday E.P. on October 2005.

Labels such as Nascent, Baroque, Deep, Sog and Extrema soon followed signing and releasing tracks from the ?phat-boys?. Although international success only came in 2006, Phatjak have been involved in the industry for more than ten years. Angel Stoxx (Vangelis Kostoxenakis) and Evan Kay (Vangelis Klimakis) grew up in Greece and became addicted into dance music during the 90s. They started DJing at the age of 15 and began producing soon after that with their first release being on Liverpool's Glow Records in 1998. Since then, Phatjak have grown to be pioneers amongst many quality house music producers that have emerged from Greece. Currently, they are constantly working on new projects and play gigs to inspire and, above all, get inspired by the crowds of the globe. They are also working on their debut album which is estimated to be launched in late 2007. Angel Stoxx also hosts the bigger dance music TV show in Greece, Xperience Zone, on MAD TV, every Saturday and Sunday from 19.00-20.00 (GMT). Mokilok Recordings, Phatjak's new label, will be launched on vinyl and digital in early 2007 with a huge release from the boys themselves. Other releases will follow from Mashtronic and Stel, with remixes from Cristian Cambas, Rhythm Code and many more. For further info and track samples please visit www.mokilok.co.uk.