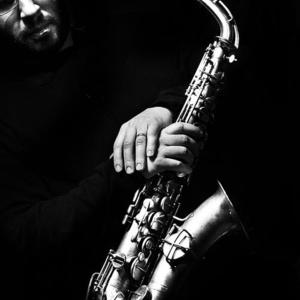 Pete Robbins (age 31) moved to New York in September, 2002, and immediately became ?a welcome presence on the creative music scene.? He has since performed or recorded with John Zorn, Mark Dresser, Craig Taborn, Ben Monder, Mario Pavone, and Kenny Wollesen, and has performed at festivals and clubs in the US, Germany, Denmark, Sweden, Belgium, Luxembourg, Spain, Switzerland, and the Czech Republic.

Robbins' leads ?an ambitious ensemble that combines spacious avant-gardism with the melodic punch of rock? (NY Times). His studio releases ?Waits and Measures? (Playscape) and ?Do The Hate Laugh Shimmy? (Fresh Sound/New Talent) were both named as top-10 jazz releases in 2006 and 2008, respectively; his fourth album as a bandleader is scheduled for release in May, 2010 on Robbins' own Hate Laugh Music label, and a trio album with bassist Mario Pavone and drummer Tyshawn Sorey is also in the works for a 2010 release. Robbins has been featured in New York Times, Washington Post, Boston Globe, Boston Phoenix, JazzTimes, JazzWise, Jazzman, Politikken, and National Public Radio. For his compositional achievements, Chamber Music America recently awarded Robbins with their prestigious ?New Works: Creation and Presentation? grant, as well as their "New Works: Encore" award on behalf of the Doris Duke Charitable Foundation. Robbins was also a 2009 guest panelist at the Brooklyn Arts Council.

?Mr. Robbins, an industrious and venturesome alto saxophonist and clarinetist, leads...an ambitious ensemble that combines spacious avant-gardism with the melodic punch of rock...[He has] a cool tone and a thoughtfully off kilter sensibility.?[C]omplex but welcoming... Mr. Robbins plays with coolness as well as confidence. ...[H]is compositions seem to breathe according to some collective whim." (Nate Chinen, New York Times)

"No doubt, Robbins' third solo outing looms as a logical progression of his spiraling notoriety within global jazz circles....A compelling and irrefutably, entertaining effort...Robbins should win over a horde of admirers with this outing, which conveys asymmetrical parts chops, gusto, funk, fusion and a clear-sighted view of the jazz canon. ... Simply stated, Robbins is a style master who sets himself apart from many of his peers. " (Glen Astarita, AllAboutJazz.com / JazzReview.com)

"Several of Robbins' tunes are flag-wavers, teeming with broad, catchy melodies. That's at odds with the very intricate lines thread together to create such themes, and that dynamic is why [his ensemble] is so intriguing....As a horn player, Robbins has liquid timbre that can remind just how pretty modern jazz can be." (Jim Macnie - The Village Voice, The Providence Phoenix)