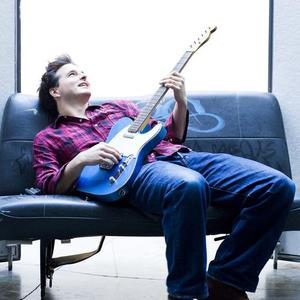 New York City based singer-songwriter, Pete Francis, is set to release his new album The Movie We Are In this May 2010. Whereas Francis' previous solo albums were largely self-produced, he uprooted his more traditional approach to album-making and assembled an entirely new crew with Los Angeles based producer Jeff Trott (right hand man to Sheryl Crow as writer and guitarist). Says Francis, ?In the past I've worked with acoustic guitar, bass, drums, B3 organ, but I wanted to bring a modern electronic element into my music.

Says Francis, ?In the past I've worked with acoustic guitar, bass, drums, B3 organ, but I wanted to bring a modern electronic element into my music. When first speaking with Jeff Trott, I quickly realized he had great musical instincts and that he was getting my tunes. And then, he brought ideas to the table that I hadn't imagined. I saw a new musical landscape could be created with my songs by working with him.?


The musicians that Trott assembled for the recording sessions helped to create this colorful landscape. Having worked with artists such as Beck, Nine Inch nails, Gnarls Barkley, Willie Nelson, Queens of the Stone Age, Dr. Dre, and Scott Weiland, the musicians (Brian LeBarton, Justin Meldal-Johnsen, John O'Brien, Victor Indrizzo and others) provided an extraordinary musical palette of talent and sensibility.


When asked about the project, Trott says, ?It really became apparent to me that Pete was a very creative and colorful song-writer. What I liked was that there was this very good sense of Pete's personality from happy go lucky to dark and brooding. All these aspects were amazing to work with and the lyrics were very colorful. I think that's one of the things I really enjoy about Pete's songs? that it's sometimes hard to really figure out what the meanings are and I think that's missing in a lot of music - the mystery of what a song is.?


The opening track, ?Glue?, generates a feeling of weightlessness by combining organic instrumentation with futuristic sounds. This song solidly represents what's to follow on the album's consistent mix of fresh and classic, electronic and acoustic, known and unknown? Each listen unlocks a new guitar lick, synth riff, bass groove, drum program, live drumbeat or horn swell, and even the sounds of the sparsely used Ethiopian instrument cumbus. Midway through the album, the listener gets catapulted into the up-tempo and joyous revelry of ?Love Shakes You Down? a sing-a-long with the familiar bell sounds of Motown combined with a string synth creating a modern and retro sound all at once. The slower, more melodic songs of the album like ?St. Paul's Fair? and ?Didn't Know I Built It? lure the listener into dream-states with rich deep vocals, sampled sounds from a town square in Italy, trance-like Wurlitzer pedaling, and vivid lyrics.


No one would deny that Francis has earned his stripes in the independent music scene. He formed the fiercely independent band Dispatch in 1995 whose uncommonly loyal fan-base bid them farewell at The Last Dispatch concert in 2004 with an attendance of 110,000 people from around the world. Since then, his career has infiltrated many musical worlds including performing his solo music at festivals around the country, reuniting with his Dispatch pals for three sold out nights at Madison Square Garden, having his solo music featured in films and television, and performing in the presence of Zimbabwean Prime Minister Morgan Tsvangirai at the Kennedy Center in Washington D.C..


Commenting on his new album and departure from his Dispatch days, Francis says, ?It's good to get out of your comfort zone. I tried to let this motto resonate at every turning point of this record's evolution.? When asked if there is an overall theme to The Movie We Are In, Francis explains, ?I like to leave this up to the listener. Hearing an album is similar to visiting a museum. The listener has to have his or her own conversation with the artwork and create their own interpretations."