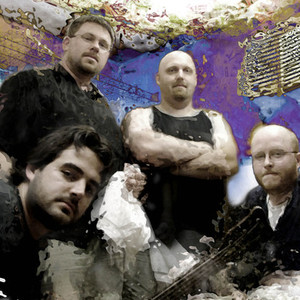 Perpetual Groove did not exist as it does now in the very beginning of its life. This story begins on the steps of the Savannah Civic Center, where Brock Butler met Adam Perry after freshman orientation at the Savannah College of Art & Design. A few yards away was their dormitory, The Oglethorpe House. This would be the site of their first jams together and many late night sessions with the other band members.

Adam & Brock immediately hit it off and soon began the search for the other pieces needed to form some sort of workable band. Joe Stickney and Brett Hinton were added to the collective shortly thereafter on drums and keys, respectively. Soon after, everyone began taking the first steps to writing music together. The four friends would spend their freshman year in school seeking out the sounds of Perpetual Groove in their dorm rooms, much to the dismay of their neighbors.

After spending their first year in the dormitory, Brock, Adam, Brett, and Joe decided to move out of the city and out to Tybee beach, offering not just a change in locale, but also more space and privacy to develop the band. In what would later be referred to as The Elephant House days, the quartet took the first steps together in documenting the Perpetual Groove sound as it was born, putting together their first official recording. This demo would become known as the "Jungle Funk Demo." Among the compositions included on this tape were Simple Pleasure Man, Echo, Funk Kitchen, Sitting In The Ghetto, Mota, Nocean, and The March of Gibbles Army. This tape offers the earliest known recordings of the Perpetual Groove sound.

The band did some very light touring through 1999, with stops at the original Wherehouse in Charleston, SC, The Music Farm, and The Brandyhouse in Atlanta. Their real home however, was J.J. Cagney's, the local bar for their friends and one of the only places in Savannah to feature live music all week. Touring was made difficult by everyone's commitment to school and part time jobs, so playing locally was an easy way to make a little money and hone their skills.

Brock and Adam were both minors in sound engineering at The Savannah College of Art & Design when they decided to utilize the school's studios and equipment to record the very first Perpetual Groove studio album. This album which is simply called Perpetual Groove featured eight tracks, all of which are still in rotation today except for two, "Galaxy Soup" & "Dionysus." Only five hundred copies of the album were pressed and it quickly sold out in Savannah and Charleston.

Unfortunately, by this time, graduation was looming and the band found they were facing an uncertain future, with careers calling outside of Savannah. Joe and Brett both left the band to pursue other roads of employment, leaving Adam and Brock behind in Savannah. This left Perpetual Groove only half complete and more to the point, dead in the water.

In the period following the dissolve of the original line-up, Brock and Adam set out to continue making music together. Sharing a house on Wilmington Island, the two musicians spent time writing, playing, and putting together ideas for new projects. Both hosted the open mic night at J.J. Cagney's every Tuesday with a few other local musicians as a way to help pay the bills and get a chance to jam with other musicians. Brock also began a long stint of Sunday nights at The Mellow Mushroom, developing his solo act while still performing original Perpetual Groove material.

It's 2001 and Brock Butler and Adam Perry are working through their summer with various jobs, including hosting the open mic night at local music shack, J.J. Cagney's. It was at one of these open mic nights that Brock and Adam met their future band mates, Albert Suttle and Matt McDonald. The pair took the stage together for the first time in the early months of the summer, and it quickly became a regular occurrence on open mic night to see Matt and Albert jamming alongside Adam and Brock.

The quartet was asked by the owner of Cagney's to play a special Grateful Dead Tribute Show on the anniversary of Jerry Garcia's passing. Realizing the potential, the quartet began playing more and more together, searching out the sounds that would become Perpetual Groove as you know them today. By the time August rolled around, the four individuals stood together as a band for the first time.

Due to employment obligations with United States Army, Albert and Matt were both limited to a light/local touring schedule for the fall of 2001, and when 9/11 occurred, it changed their touring outlook drastically. Throughout the fall it was not uncommon for one or the other to have to report for duty in the wee hours of the morning immediately following a show. It was also along this time that the band befriended future manager, Ben Ferguson. Ben quickly sold the band on his long-term vision of the future and things began to take a serious turn.

It was during the early months of 2002 that the band really started to develop their sound and stage presence as a whole. Tim Fallin, who was running sound for the band, was joined by Ben's longtime friend Jason Huffer, and slowly the makings of a crew was apparent. The percussion team started to really connect and Brock and Matt both found comfortable realms for the noises they were creating. New material was slowly creeping into the setlists, written together for the first time. Each member continued to evolve their sounds as new gear was tried, purchased, and then traded again, until the right tones came together.

A lot of important advances were made during the winter months of 01 and 02. The band made their first foray into Atlanta in December and quickly befriended local scenesters C. Robie and The Dunhams. It was through The Dunhams that the band really started to build a strong Atlanta following, which was highlighted early on by their appearance at The Annual Music Midtown Fest. The music was starting to roll and it was time to get the other aspects of the band into motion, namely promotions.

It was decided early on that the best way to get the name out without an album was to hand out free live CDs. The marketing approach worked and the band started seeing more and more people coming out to their shows. Still touring lightly, the band decided it was time to start looking for another piece of the big puzzle, a booking agency. We were introduced to Degy Booking and Chad Denney through our friends The Dunhams. Everyone instantly hit it off with Chad and starting working with Degy exclusively in the fall of 2002. Making their way into the world of full time touring....

One year after forming, Perpetual Groove was taking the steps to becoming a full time touring band. Chad and Ben had put together an aggressive touring schedule and plan, focusing largely on building the Southeast fanbase. The band gigged regularly from at least Thursday through Saturday for the better part of the fall picking up more and more fans in each new market they performed. However, one thing was still missing, an album.
Through some Atlanta friends, the members of Perpetual Groove had befriended Mark Michaelson, the owner of a local studio. It was at his studio that the band decided to record their first album together, Sweet Oblivious Antidote. Although the album was recorded in July, it would not be released for another six months.

In September of 2002, the band made their first appearance at the Georgia Harvest Festival, with an early main stage slot and an evening slot on a mud-ridden second stage. It would mark the first real festival appearance for the band as well as the first true gathering of what was slowly becoming a solid fanbase. However, the real moment came on Saturday night with the help of Jeff Dunham who put together a late night performance for Perpetual Groove which won critical acclaim and allowed the band to truly showcase their unique style of jam. This performance helped solidify Perpetual Groove as a band to be reckoned with in the Southeast. With Harvest Fest behind them, Perpetual Groove embarked on their first ever tour outside the Southeast, heading up to the Midwest for a short two week tour. The band closed out 2002 with a sold out performance at The Georgia Theatre on New Year's Eve with good friends Moonshine Still.

As 2003 turned, the band gigged harder then ever before, playing sometimes almost five days a week in support of their new album, which was released in late January. Though mostly performing in the Southeast, they were presented with the opportunity of supporting The Big Wu on their Spring Northeast tour. It would be their first time in the area, as well as a return trip to the Midwest. The band continued to grow as did their fanbase, and by the time summer came around, they were ready to expand their territory even more.

The band's first National tour would begin in June of 2003, with two grueling months on the road, numerous festival plays, including their first High Sierra and Berkfest appearances and tour stops from California all the way to New York. In just a little under a year, the band had managed to log almost 70,000 miles on their new van. Summer turned to Fall and in the blink of an eye, 2003 was almost gone. The end of the year was commemorated by their first appearance at the Historic Lucas Theatre in Savannah, GA for their New Year's Eve show.

Of course, this story has no end in sight, and as 2004 moves along, the band is still at it, cultivating a national fanbase and refining their craft. A few tweaks here, some changes there, and you have the band has they exist today. The departure of Tim Fallin as front of house engineer has been the biggest change of the year, but with endings come new beginnings. Michael Gaster joined the crew in February of 04 as front of house engineer and production manager and continues to add more and more to the Perpetual Groove show as each month passes.

For more up to date accounts of what is happening with Perpetual Groove, go see them live!