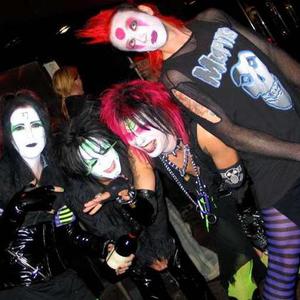 Peppermint Creeps are a Glam metal band from Hollywood, California, formed in 1997. The group are recognisable by their makeup, often fluorescent red, pink or green coloured hair, as well as their elaborate stage costumes consisting of mainly black PVC with fluorescent colours again. The Peppermint Creeps have become an icon to many glam rock bands globally, thus their look is no longer unique but has become popular.

The Peppermint Creeps started life as a four-piece band. Made up of a half Canadian half American line-up; Kari Ash and Macy Malone coming from Canada, Traci Michaelz and then vocalist Billi Foxxx coming from America. Together they recorded some demo tracks and forged early sketches of what would later become their trademark image.

Soon after Billi left the group, the band continued on as a 3 piece. The Peppermint Creeps then recorded a studio E.P. produced by Phil Soussan and Randy Castillo called "CreE.P.show". The band claimed, "It was done in 5 days and cost $2,000.00 to record"

In 2001, Peppermint Creeps expanded from a three-piece band, to a four piece, for the first time since their beginnings, bringing in Arizona guitarist Eddie Electra. The group regularly played "Club Paranormal" a Night Club at the Key Club in Hollywood, which was ran by the band's drummer; Traci Michaelz.

Bassist Kari Ash would be the second member of the band to leave, before the group recorded a promotional video, for their song "Lesbian", the video featured the band in their Club Paranormal haunt, along with computer graphics, of the band in a candy world, similar to that seen in Charlie & the Chocolate Factory, black haired bassist Andii Stittch was part of the video in place of Ash. Stittch would not be in the band for long, leaving shortly after the group played a show with fellow Glam metal band, the Murderdolls in Hollywood.

From a local Hollywood band "BlaQ!" the Creeps found their newest member; teen guitarist Robbie Stylez was brought in, Electra switched to bass for the Peppermint Creeps, as he had been playing in that position for Pretty Boy Floyd.

The band gained further attention due to their MySpace profile, becoming the website's number 1 Glam band. In 2005, they released their second album, "We Are the Weirdos". They also recorded another promotional video with the most recent line-up, for a song off their first album, "Stupid". Another recent change occurred, when teenage guitarist Robbie Styles left the band in summer of 2006, the group went on a US tour as a three-piece once again.

During August 2006 the Peppermint Creeps had a very public feud which spread over MySpace, and several music media websites. The fall-out which caused the public feud, was reportedly between vocalist/guitarist Macy Malone and bassist Eddie Electra, with drummer Traci Michaelz choosing to take Malone's side in the debate. Thus Electra quit the band.

After Electra quit the Peppermint Creeps, the debate continued on the popular website MySpace, both parties were embroiled in blog and bulletin wars. With Electra claiming the Peppermint Creeps had split up, and that he was planning to create his own project under the band's name.

Founding members Malone and Michaelz however, denied the split insisting that the Peppermint Creeps will be carrying on, and that they would announce the new members of the band with the unveiling of a new website on September 15, 2006.

Eddie Electra has announced that he will be pursuing a solo career, stating; "I think I'm gonna like this whole solo shit, it's very freeing I have some great musicians behind me to work with and the music I'm gonna drop".

On September 15, 2006, as planned the band unveiled two new members, this saw the Peppermint Creeps returning to a four piece band; Robbie Stylez returned to the band on guitar, and a new member Billy Blade was brought in on bass, replacing Eddie Electra.

With the new members also came a darker image change, some of the elements were similar to bands who played at the Batcave club in London during the 1980s with; fishnets, teased hair, heavy make-up and in Macy Malone's case a mohawk. Unlike their previous image where the band each had a designated colour, the new line-up dress in black with luminous green accessories; they did however keep some of the red in their hair.

On The 13th Of June, 2008, Traci Michaelz Passed Away,
Leaving the Peppermint Creeps a 2 Piece Band.