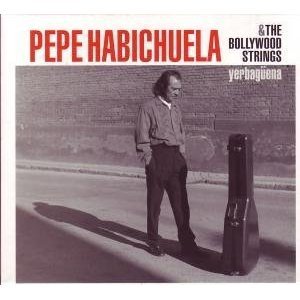 That the deepest roots of flamenco went all the way to India, was a theory. This record puts the theory into practice. It was recorded between Bangalore (India), Barcelona and Madrid, alongside the Indian orchestra The Bollywood Strings, led by the violin player Chandr?. The musicians themselves were surprised by the total spiritual connection between the Indian music with its intricate tradition, and Pepe's flamenco.

Pepe Habichuela belongs to one of the great flamenco dynasties, the Habichuelas, and to the generation of Paco de Luc?a, Camar?n de la Isla, Enrique Morente, Manolo Sanl?car... which has opened the way for the current generation of young flamencos and whose work has brought about the enormous popularity that this art form enjoys nowadays. From Pepe?s trajectory, it is possible to perceive the surprising evolution of flamenco in the last few years clearly. He was the first flamenco artist who recorded for the independent record label Nuevos Medios and he passed on his knowledge to his sons and nephews, members of the band Ketama, to Raimundo Amador and to Jos? Soto ?Sorderita?.

He took his first professional steps in the Sacromonte caves (in Granada) and he then moved on to the Madrid tablaos. At that time he accompanied Pepe Marchena and Juanito Valderrama. However, his close cooperation with Enrique Morente in the seventies marked a change in direction for his career, and together they discovered a new world of harmonies that found expression in two historic works, Despegando and Homenaje a D. Antonio Chac?n. As a solo artist, his first record A Mandeli was distributed worldwide, and his second CD, Habichuela en Rama (1997), was recorded with the cooperation of his son, Jos? Miguel Carmona (Ketama).

Apart from that, Pepe Habichuela also played in a duet with the American trumpetist Don Cherry, a veritable legend of free jazz and one of the first theoreticians of fusion. The last chapter in this innovative career has been the fusion between flamenco and classical Indian music, a development that was born from a project he had with the British-Indian musician Nitin Sawhney and which has taken shape in Yerba G?ena, a record that was made between Bangalore (India), Barcelona and Madrid, with the participation of the Indian orchestra The Bollywood Strings.