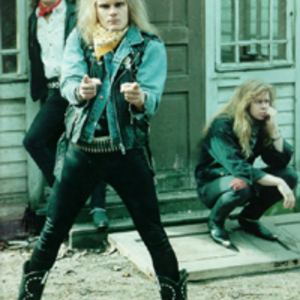 Some time 1976, in a Finnish railroad town, south-eastern Finland, Kouvola - also known for the remorseless reputed army base located nearby - the first version of PEER G?NT was beginning to form. The name comes from a rose and it wasn't until later that the band discovered, the Norwegian playwright Henrik Ibsen had a play by almost the same name based on the Norwegian composer Grieg's music. Nevertheless, right from the beginning, the spine of the band has been Timo Nikki.

By 1983, after various constellations, the band had shaped into a trio. This legendary formation consisted of T. Nikki ? bashing the shit out of his Strats and roaring like a wild boar; Twist Twist Erkinharju banging his double kick drum sets as it was the last day on Earth and Ts??tz Kettula the mean ol' badass fourstringer from the dark side of the moon. This magical line-up went through winning the annual battle of the bands in 1984 to becoming the gold selling number one Northern hard rock band. With no time to stop the band kept extremely busy touring Finland, Scandinavia and Europe during the rest of the 80's and releasing such hard rocking anthem collections as ?Backseat', ?Good Girl's Don't?', ?Fire Wire' and ?Don't Mess With the Country Boys'.

During the 90's mainstream anti-rock boom, the band returned from bigger stages to playing mainly rock clubs and pubs. Heavy touring still continued and in 1994 the band finally released a new album carrying the title ?Smalltown Maniacs'. This long-awaited earth breaking album was more than warmly received by fans. The album contains some of the tightest hard rocking riffs, licks and fills ever recorded in this part of the Universe.

After all the years on the road the guys felt that it was time for other undertakings alongside Peer Gunt: Nikki founded PeeGee recording studios, Twist Twist joined the Leningrad Cowboys and Ts??tz started customising Harleys. Gigs became fewer and by the end of 1996 the band decided to take a break. Although, Peer Gunt's short come-back tour in September 1998 proved a huge success, the band kept gigging scarcely, playing only major rock festivals.

At the end of 2002 T.Nikki, Twist Twist and Ts??tz decided to return full-time to playing in the band. This resulted in three years of touring with sold-out venues and a fresh studio evidence ?No Piercing, No Tattoo' in 2004. The album went straight to the charts and fans were over the moon for the second cometh of their beloved good time rock'n'roll band.

However, the trusty old Red Chevy badly needed its engine replaced - Differences among the players led to the band splitting up in late October 2005. T. Nikki, Twist Twist and Ts??tz ended their almost 25 year journey at the Tavastia Rock Club in Helsinki, playing two consecutive nights to sold-out crowds.

In 2006, T. Nikki decides to continue the story of Peer Gunt, but with new members. The current line-up consists of T. Nikki; guitars and vocals; Pete Pohjanniemi; bass and Sakke Koivula; drums. After a couple of years of steady rolling, the renewed Peer Gunt released their second full-length studio album, titled 'Buck the Odds', in late October 2009.

As this is written, praising reviews of the new album are flooding in. It really seems that with 'Buck the Odds' all the pieces have fallen into place. With tunes like 'I Play it Cool' and 'Break Me' any remaining doubt in any possible doubter's ears and minds is blown away. This shit is boogie based homegrown Detroit influenced badass rock'n'roll at its best - raw and greasy! Peer Gunt is back to stay and won't go away.

Good time rock'n'roll to you all! -R2

No Piercing, No Tattoo