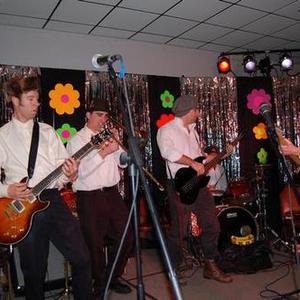 Paundy is a six piece instrumental band inspired by Film/TV music, with influences ranging from Jazz to Punk. Our approach to creating music is simple, if it feels good, we play it regardless of style. It all started with Paul and Andy, hence the name Paundy. In the mid 90's we started making strange 4 track cassette recordings for our own amusement. We never thought anyone would hear them so we felt uninhibited to be as experimental as possible.

After a few years we were playing live shows as a duo for art openings and silent films. We would sit around a table full of percussion and toys while trading off instruments (much like a one man band with two people). Our friend Tony was using our music in his films (Benkyo Productions) and was turning into a devoted Paundy fan. Tony is a musician as well and he became the third band member. Our other friend Chad, also a multi-instrumentalist, offered to help with our live shows. With the addition of Tony and Chad, who were also contributing original songs, Paundy became much more versatile live because we could all switch between instruments. Justine started playing violin with us in 2000, and working with strings gave us a whole new dimension. Justine also plays keyboard and percussion when we play live. We had always wanted horns in our music and we finally found that in our good friend Drew, who plays on trumpet, trombone, harmonica, and whatever else happens to be sitting next to him on the Paundy table. Over the years, and almost by accident, we have become a full band and our shows have grown to be quite elaborate with film, costumes, special musical guests, and many devoted fans. We took this Paundy thing to Europe in February 2010 with Before Cars, (Chad Channings solo project with many of the same members as Paundy http://myspace.com/beforecars) for a tour through Poland, Germany, and the Netherlands. It was a great time! We made a lot of new friends and expanded the Paundy family.

Are You My Mother?