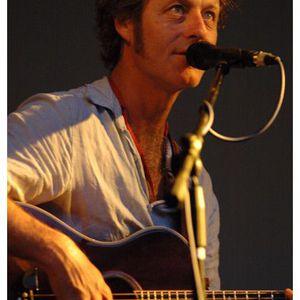 Paul Tiernan, once singer with "Flex And The Fastweather", a band who in their heyday had a string of hit singles in Ireland, a publishing contract with Paul McGuiness of U2 and a top ten hit in Sweden, has for the past ten years embarked on a solo career starting with the release of his debut album titled "Who's fooling who?" in 1995 in Ireland. As well as performing solo, Paul has also toured internationally as a guitarist with the famous '60s legend Donovan...

Following on the success of his first album, he formed a trio with Kevin Murphy on cello and Colm McCaughey on fiddle bringing to the music an unusual sense of melody crossing over the rock-traditional-folk divide.

This distinctive combination has so far resulted in a successful tour of America and Scandinavia in 1994, a stunning performance at the international South by Southwest music seminar in Texas in 1995, tours and festivals in Switzerland and in Germany throughout the last ten years and a string of vibrant performances to wildly enthusiastic crowds all over Ireland.

The debut album was followed by a more "electric" album called "Virgoville" in 1998. Paul released his third album "God knows i love a happy ending" in 2002, an enthralling, swirling mixture of strings and voices and is at the moment working on his fourth album.

Recently Paul appeared on the Irish television series 'Other voices' featuring the best of Irish singer songwriters. One of Paul's songs 'Belle' has been included in the top ten Irish album of the same name.

Paul has also recently joined Irish cult band Interference who have been described as being one of the seminal influences on the likes of well known Irish artists, The Frames and Mundy.
Paul has a song (the title track) covered by one of Ireland's most popular singers, Kieran Goss, on his last album 'Red Letter Day'.

One of Paul's songs ?how to say goodbye' is in an American film ?Nick and Norah's Infinite playlist'?.recently a top 10 box office hit in the USA and to be released worldwide in 2009.

Paul Tiernan released his fourth CD entitled ?Belle' in 2005 which CDbaby (the worlds biggest online distributor of independent cds) wrote: ?this is, without a doubt, one of the most memorable male folk albums to come through our doors in years.'


?Earthquakes start with little cracks' , Paul's latest CD was released in Ireland on March 2nd, 2009. The opening song ?Breakfast in bed' has already been voted on of the best songs of 2008 by ?Rock n' Folk' , one of France's most popular music magazines.
For tour info, audio samples & CD purchases see Paul's homepage.