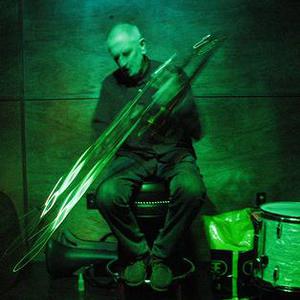 There are two artists with the name Paul Rutherford. The first, chronologically, was a free improvisational trombonist from England. The second was member of the 80's pop group Frankie Goes to Hollywood. 1. Paul Rutherford (1940-2007) was a free improv trombone player. He was part of the early 70s improv group Iskra 1903 with guitarist Derek Bailey and bassist Barry Guy. After a few years the group was revived with Philipp Wachsmann replacing Bailey, a phase of the group's life that lasted from roughly 1977 to 1995.

1. Paul Rutherford (1940-2007) was a free improv trombone player. He was part of the early 70s improv group Iskra 1903 with guitarist Derek Bailey and bassist Barry Guy. After a few years the group was revived with Philipp Wachsmann replacing Bailey, a phase of the group's life that lasted from roughly 1977 to 1995. Iskra 1903 was one of the earliest free improvising groups to omit a drummer/percussionist, permitting the players to explore a range of textures and dynamics which set it apart from other contemporary improvising ensembles like Spontaneous Music Ensemble and AMM. The group's unusual name means "spark" in Russian; it was the title of a revolutionary newspaper edited by Lenin. The "1903" designation means "20th century music for trio"; occasionally Evan Parker played with the group (Iskra 1904) and Rutherford also at one point assembled a 12-piece ensemble called, inevitably, Iskra 1912.
Rutherford also played with Globe Unity Orchestra, London Jazz Composer's Orchestra, and The Mike Westbrook Orchestra. He also played a very small number of gigs with Soft Machine. He is perhaps most famous for solo trombone improvisations. His album "The Gentle harm of the bourgeoisie" is a landmark recording in solo trombone.
Rutherford died on 6 August 2007, aged 67.
(based on the Wikipedia article)


2.Paul Rutherford (born December 8, 1959 in Liverpool, England) was the backing vocalist and dancer with 1980s pop band Frankie Goes to Hollywood (FGTH), one of the group's two openly gay singers. He was born in inner-city Liverpool but several years later moved to the Cantril Farm estate, where future footballer Mick Quinn and future comedian Craig Charles were among his neighbors.

He emerged from the 1970s punk scene on Merseyside to team up with Johnson in a new band which would go on to dominate the UK Singles Chart in 1984 thanks to a mixture of skill, controversy, marketability and luck.

The band released two albums: the international best-selling "Welcome To The Pleasuredome" which spawned one of the biggest hit singles of the 80's: "Relax." Further singles "Two Tribes", "The Power Of Love" and "Welcome To The Pleasuredome" all topped the singles charts worldwide as well. Although the follow-up album "Liverpool" wasn't as big as "Pleasuredome", it still did well- "Rage Hard", "Warriors Of The Wasteland" and "Watching The Wildlife" were hits. When the band decided to part, Rutherford released a solo album called "Oh World." Martin Fry and Mark White of ABC collaborated on a few of the songs, including the single "Get Real." Another noteworthy track was his cover of Chic's "I Want Your Love."

Paul is known for being one of the first stars to endorse nipple-piercing and also for the ace of hearts he had tattooed on his arm.

Rutherford currently lives on Waiheke Island, New Zealand, with his longterm partner, although has moved to the UK due to the reunion of some of the Frankie Goes To Hollywood members.

''Neuph'' Compositions For Euphonium And Trombone

Gentle Harm Of The Bourgeoisie