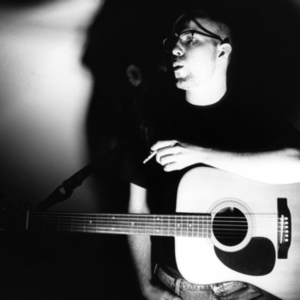 CAREER
In the Spring of 1988, Kotheimer recorded solo acoustic demos at Burton-Judson Courts at the University of Chicago. In 1990-1992, he performed bi-weekly sets at the Green Street Caf? in Chicago's Halsted/UIC neighborhood, where he was frequently joined onstage by multi-instrumentalist Oliver Steck. Later the duo performed at the Torchlight Caf? in Chicago's Lakeview neighborhood.

From 1993 to 1996, Kotheimer was active in the Red Herring Performers' Coffee House on the campus of the University of Illinois, Urbana-Champaign. In 1994, Kotheimer released Essential Demo Recordings, the first cassette to bear the hand-made record label name and logo.

From 1995 to 1997, Kotheimer was the songwriter, lead singer, and rhythm guitarist in the band Herring Boys (with Andy Gricevich, guitar, and Nathan Otis, drums; later joined by Aaron Barr, bass guitar). In 1997 and 1998, Kotheimer was bassist/guitarist and singer in The Prince Myshkins (with Rick Burkhardt, accordion and vocals, and Andy Gricevich, guitar and vocals). In 1998, Kotheimer toured extensively in the U. S. and Canada and performed at South by Southwest, CMJ, and other independent music festivals.

In 1999, Kotheimer participated in direct action against the World Trade Organization in Seattle, Washington. His song, ?Wal-Mart Associates' Mandatory International Anthem,? as performed by participants of the School for Designing a Society, appears in the documentary 30 Frames a Second: The WTO in Seattle.

In 2000, Kotheimer was one of approximately a dozen co-founders of the Urbana-Champaign Independent Media Center. From 2000 to 2003, Kotheimer was a participant-in-residence at the School for Designing a Society. From 2003 to 2006, Kotheimer was bassist and arranger in the band Theory of Everything (with Darrin Drda, vocals/guitar, David Tcheng, multi-instrumentalist, and various percussionists).

RECENT ACTIVITIES?
In August 2006, Kotheimer completed rough demos for his song cycle, A Martian Sends A Postcard Home: Nine Poems Set to Music. In that same month, Kotheimer published the political folk song ?Trouble in the Water? as an mp3 on the Urbana-Champaign Independent Media Center website. The song, based on the traditional American spiritual ?Wade in the Water,? was written in September 2005 to addresses the tragedy of Hurricane Katrina.

In April 2007, Kotheimer released SERIOUS FOLKING MUSIC, 2ND EDITION, which augmented the first release with protest songs from the Bush Administration years. In October 2007, the vast majority of Kotheimer's previously-released material was collected onto a single MP3CD release entitled SONG ABOUT EVERYTHING. The title track originally appeared on the 2000 release, 113 CAROLINA AVENUE.