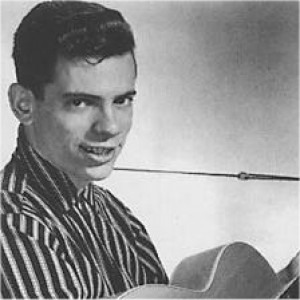 Paul Evans (born 5 March 1938, in Queens, New York) is a rock and roll singer and songwriter who was most prominent in the 1950s and 1960s. As a performer, he had hits with the songs "Seven Little Girls (Sitting in the Back Seat)", "Midnight Special" and "Happy-Go-Lucky Me". "Happy-Go-Lucky Me" has been featured in the John Waters' Pecker, and episode #3.10 of the comedy television program Scrubs.

"Happy-Go-Lucky Me" has been featured in the John Waters' Pecker, and episode #3.10 of the comedy television program Scrubs.

He was also a songwriter whose songs were performed by numerous performers, including Elvis Presley, Jimmy Dean and Pat Boone. His most successful songs were "Roses are Red (My Love)", which was a number one hit for Bobby Vinton in the U.S. Billboard Hot 100; and "When", a chart topper in the UK Singles Chart and #5 in the U.S. for The Kalin Twins.

He also had a hit in the UK in 1978 with the morbid country song "Hello, This is Joni" (The New Zealand pressing released by Polydor Records) or on some recordings it was titled as "Hello, This is Joanie (The Telephone Answering Machine Song)" written by Paul Evans and F. Tobias and produced by Jimmy 'Wiz' Wisner. The B side of the 45 rpm record featured a song called "Lullaby Tissue Paper Co". It was written by Paul Evans and B. Wells. It was also produced by Wisner.