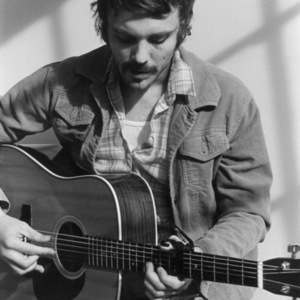 Paul Curreri (born January 28, 1976, in Seattle, Washington) is an American musician and songwriter who performs mainly in the folk and blues music styles. He married songwriter- guitarist Devon Sproule in May 2005. They often appear and tour together. His brother Matt Curreri is also a musician, currently performing with Mananaland. Curreri is renowned for his inspired songs, bright voice, and talented finger-style playing.

Curreri is renowned for his inspired songs, bright voice, and talented finger-style playing. Described by WTJU's Aer Stephen as "A ruffled gypsy gutter cowboy, a true life adventurer, a bright new voice", Paul Curreri has also been compared to Martin Sexton for his reputation for inspired live performances (and more elusive success in the studio).

Raised in Richmond, Virginia, Paul now makes his home in Charlottesville with songwriter/guitarist Devon Sproule; the two were married in May of 2005. Though he grew up playing music, he ended up enrolling at Rhode Island School of Design (RISD) to pursue painting and film. While his experiences at art school helped develop his ability to observe and record the visual world, his true passion again rose to the surface. By the time Paul graduated from RISD, he'd composed over 200 songs on guitar and piano. Turning down a job at MTV, he set to work carving out a life as a musician.

Following a spot at New York's Knitting Factory in 2001, Curreri received several tour invites from Kelly Joe Phelps. Over the next four years, the two would play over 100 concerts together.

In April of 2002, independent Brooklyn-based label City Salvage Records released Curreri's first album, From Long Gones to Hawkmoth. Deemed a fantastic debut record by many, others of the folk-stool school pined for the barer, stripped down sound of two semi-legendary demos, referred to simply as "the red one" and "the blue one," which contain early versions of well-known songs like "Bees" and "Senseless As A Cuckoo," as well as unreleased ballads.

The album found Curreri accompanying himself on acoustic guitar, and the resulting sound is similar to his inspired and inspiring concert performances. However, Phelps did play guitar on "Beneath A Crozet Trestle Bridge."

Commenting on "Fishbowl," Curreri recounts how he'd written it in Kelly Joe's attic the night before.

"I was having a bit of trouble come recording, with this and that . . . doohickies, details and tempo. Well, Kelly Joe disappears in the back of the studio, and then comes skipping on back with a big wooden plank slung over his shoulder. He leans it against the wall, all grunting, and says to me, 'Play like that. Play like a post, Paul.' It only took one more take."

The resulting effort was an album of primarily original material nourished by, but not slavish to, the country-blues and folk traditions which lie at the heart of Curreri's musical influence.

The Spirit Of The Staircase, Curreri's 2004 release saw the return of Jeff Romano, who produced and performed on 2002's From Long Gones To Hawkmoth. The album presents the music of Paul Curreri via a new variety of musical accompaniment.

The title of the record comes from a French expression l'esprit d'escalier, which means: Things you think to say after it's too late and you're on your way out the door.

2006 saw the release of his first live album, Are You Going To Paul Curreri. Recorded in two evenings at Charlottesville's Gravity Lounge in in late January, the recording finds Curreri in fantastic form, and backed by two of Charlottesville, Virginia's most versatile musicians ? Randall Pharr (bass), and Spencer Lathrop (drums).

Curreri's fifth album, The Velvet Rut, was released in the UK on Tin Angel Records in June 2007. It was released in the States in October of 2007, again on Brooklyn's City Salvage Records. It is a decidedly darker record than many of Paul's others (though some call it his funniest). Uncut Magazine gave it four stars, and called it a "riveting trip." Mojo gave it an almost unheard of 5 stars. "The Velvet Rut" features a mass of sound surrounding eloquent guitarwork. Curreri played all the accompanying instruments himself.

"5 STARS... With his instinctive, sensual gift for melody, Curreri's songs are saturated in colour and feeling, the sonic equivalent of William Eggleston's photography. Superb."
?Mojo

Are You Going To Paul Curreri

The Spirit of the Staircase

From Long Gones to Hawkmoth