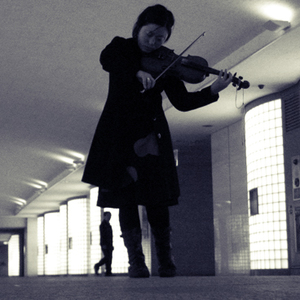 Lima, Per? Classically trained violinist, began his studies at 5 years old. In 1992 he traveled to Japan at the International Festival of the teacher Shinichi Suzuki. In 1999 he studied violin at the Center for Andean Music and Dance of the Pontificia Universidad Catolica del Per? (Cemduc). In 2005 and 2006 takes violin lessons Sviglas Jewish Alicia (Klezmatics) in NY. 2006 to 2009 he studied with maestro Ali Akbar Khan, an exponent of traditional music of North India in San Rafael, California.

Trends has also experimented with sound performances and electroacoustic improvisation sessions, in festivals of electronic music (CONTACT) and the Contemporary Classical Music Festival in Lima along with musicians from the local and international scene (Garden, Omar Lavalle, etc.)?

His work has also focused on performance. Since 2001 participates in several multidisciplinary projects in the city of Lima organized by the Spanish Cultural Center, the North American Peruvian Cultural Institute (ICPNA), the Municipality of Lima, among others. He has collaborated in performances held in San Francisco, Tokyo, Madrid and Valencia.
Since 2006, presented together with a group of Peruvian artists sound interventions in public spaces in the city of Lima: White Room, in the gallery Mogollon in the center of Lima (2006); Bath no. 01, Bath no. 02 and Bath no. 03, solo performance done in the bathroom of the store Neomutatis Barranco (2007), The Repository, an intervention at a warehouse in the industrial zone of Cercado de Lima (2007); Beach Bethlehem concert in a parking lot in Center Lima Padrecocha, audio and visual intervention in the Contemporary Art Gallery counterstructure Link (2010) in the city of Iquitos.
In 2007 released his first solo album entitled ?YUYU?: 10 instrumental tracks composed between 2002 and 2007. The 2009 edit Ensemble with Three Americas ?Spaces & Channels,? a compilation of field recordings that were recorded in the improvisations of a trio of strings interacting with various soundscapes of the Peruvian jungle. The 2011 released his second solo album ?koPpu? 10 compositions for film and dance.

His works are included in compilations such as ?Venus Attacks? (2002) and ?Inventing the voices? (2009) edited by the Centro Fundaci?n Telef?nica
CD's available at: