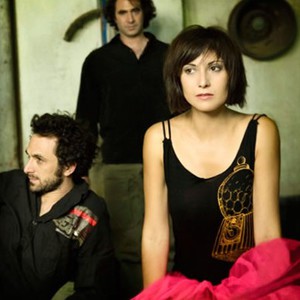 Pastora's sound, both Spanish and international at the same time, is based on the vocals and lyrics of Dolo, the music and arrangements of Ca?m and the visual concepts created by Pauet. Building on these foundations, Pastora have developed a unique artistic proposition that blends together programming, acoustic sounds, lyrics that go beyond the normal bounds in their originality, new musical ideas and a visual accompaniment to the songs that is closer to video art than video clip.

Now, having forged a new path for Spanish pop with their first record, Pastora release a CD+DVD for their second album - La vida moderna.

La vida moderna represents an advance in Pastora's music without diluting their original essence. Their new recording comes as a CD with 13 new songs (lyrics by Dolo Beltr?n and music by Ca?m Riba) and a DVD on which, for the first time in Spain, 13 visual compositions created by Pauet Riba accompany the tracks. In addition, the DVD includes new 5.1 remixes of tracks on the album, an audiovisual biography, an album of unpublished photos and a "Making of ?" film. On La vida moderna, Pastora remain faithful to their musical and aesthetical roots, choosing to look to the street to unearth new stories.

On La vida moderna, the trio from Barcelona tighten up their sound. Produced by Ca?m Riba and Carlos C?rcamo (who in 1975 created Granada, one of Southern Spanish rock's seminal groups), Pastora's new album brings together both musicians and machines. The programming done by Ca?m Riba, Carlos C?rcamo and ?ngel Riba is maintained, but it is now accompanied by guitar played by Dayan Abad, Jero Castell? and Ca?m himself; piano and keyboards played by Vicente Borland; bass by Ferr?n Ochoa and double bass by Yelsy Heredia; drums by Pau Josa; saxophone by Segundo Mijares; violin and cello by Diego Galaz and ?rsula Garc?a; backing vocals by Bela and Joana Rubio? La vida moderna mixes distinctive electro pop with a warm acoustic sound to create an album that has a deeply rich musical quality filled with intriguing details to produce a subtle and carefully crafted recording.

La vida moderna is a treatise on contemporary pop. It consists of 13 songs written from the bleaker side of sentiment, telling stories about people who break free of convention, rules and systems. The tracks recount nostalgia and reality, flight and return, search and discovery. They also tell of loss and losers, melancholy and loneliness, disappointment and frustration, all given a Mediterranean sensuality by the magnificently intimate and breathy voice of Dolo.

La vida moderna is Pastora's second album and provides confirmation that it is still possible to be surprised by a distinctive sound. Beyond labels or anything else tying them to a style or convention, Pastora create and live in a world of their own, gliding over the contours of modern life and telling us about everything that they see; the same things that we see and experience every day - La vida moderna.