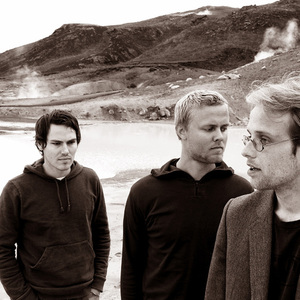 Ampop is an Icelandic melodic-pop/rock band from Reykjav?k, Iceland. The name of the band is actually the name of the first song they ever wrote, and is made from the words ambient and pop, which they thought was the definition of the music they were making at that time. The band was originally a duo, but before making their third album they added a drummer to the band. The band currently consists of 3 members: Biggi Hilmars: Guitar, Vocals Kjartan: Keyboards J?n Geir: Drums

The band was originally a duo, but before making their third album they added a drummer to the band. The band currently consists of 3 members:

Biggi Hilmars: Guitar, Vocals
Kjartan: Keyboards
J?n Geir: Drums
Those in the know will have first come across the band through their two critically acclaimed electronic based albums released in their homeland. The second of these (?Made for Market?) was considered by many local critics the best Icelandic album of 2003. Their one supporter outside Iceland was John Peel.

Keen to develop their sound the band bunkered down in their own studio and over time developed a more organic and song based direction moving away from the more electronic influences of their earlier material. The first examples of the band's new direction were demo versions of two songs, ?My Delusions? and ?Don't let me down? which saw the light of day early in 2005. These tracks were instantly picked up on by Radio 1's; Zane Lowe who played ?My delusions? on several occasions and invited the band to play live on his show from Austin, Texas, during this year's SXSW music festival. AMPOP played alongside The Bravery, Hot Hot Heat, The Blood Arm and Queens of the Stone Age as the only unsigned band.

Other important DJs such as Huw Stephens and Vic Galloway at Radio 1, or Vic McGlynn at BBC 6 Music have also put the stamp of approval to the new songs and have championed the band in their radio shows.

After the successful appearance at SXSW the band went back to their studio to finish the album, stopping only to play in NY and the NXNE festival in Toronto. The first single off the new album, ?My delusions?, gets a UK release via Relentless Records imprint Stimulus Records , who spotted the band live in Austin, on November the 28th.

The band has been invited to support KT Tunstall in Aberdeen on October the 4 th at a Radio 2 event, and will be playing London next to launch the single on November the 28 th at Islington Bar Academy.

Meanwhile, back in Iceland, the brand new album, ?My delusions?, is now out via Dennis Records/Sena and is getting rave reviews and extensive radio play.

Sail To The Moon

Nature Is Not A Virgin