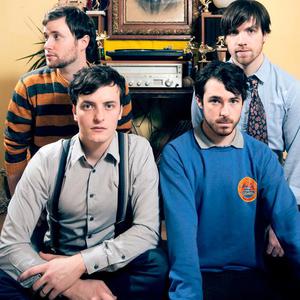 Hailing from the unlikely small community of Belfast, Prince Edward Island, brothers John and Rob MacPhee and neighbour Colin Buchanan began playing music together at a very young age in a variety of garage bands. After meeting in high school, David Cyrus MacDonald was recruited and Paper Lions cemented with John and Rob filling the positions of lead vocals and bass respectively, Colin on lead guitar and David on drums.

After the release of their critically acclaimed, five-time ECMA nominated 2010 EP, Trophies, Paper Lions has literally been around the world. They performed at the 2010 Vancouver Olympics and Paralympics, the 2010 World Expo in Shanghai, China, from Italy and Malta, to Nashville and New Orleans, as well as a series of shows that brought them from Goose Bay, Labrador, all the way to the most northern human settlement on Earth - Alert, Nunavut.

The Lions have seen their fair share of success on the home front as well. Their song Traveling was uploaded to a fledgling YouTube in 2006, and it's not hard to tell when watching it. By December 2011, the heavily pixelated video had received 60,000 views. By May 2012, it had garnered over 1,000,000 views and continues to climb. The band decided to offer something to these new found fans, and started giving away their EP Trophies in exchange for an email address. Mere hours after posting the letter of explanation to their fans, it hit the front page of Reddit.com. Over the next day, the band's website crashed under the weight of over 130,000 hits, and the EP was downloaded more than 12,000 times.

So it has been a very hectic, strange and exciting winter. One that was capped off by the recording of their debut full length album, with producer Howard Redekopp (Tegan and Sara, The New Pornographers, Mother Mother) during a Vancouver April. Slated for release in Fall 2012, these 10 songs are a Polaroid of Prince Edward Island twenty-some years ago. Stories of love and pain, childish fights, best friends, beaches and forts; they evoke the melancholia of youth, remembered by someone not very far from it.

Eight years and three vans in, with over 1300 shows played, Paper Lions has received 16 ECMA nominations and one win, over twenty PEIMA nominations and four wins, the Touring Artist of the Year award from CAPACOA, a Verge Music Award nomination, and a CBC Radio 3 'Bucky' award nomination. They've played Hillside Festival, Virgin Festival, The Warped Tour, Stan Rogers Folk Festival, Evolve Festival and many more. They've shared the stage with such varied acts as CAKE, Tokyo Police Club, Hollerado, The Rheostatics, No Joy, Hot Hot Heat and Electric Six. They've had their songs featured on ABC and NBC, MuchMusic, MTV and AUX, had an iTunes Single of the Week, were finalists in the 2010 John Lennon Songwriting Competition and won the David Suzuki Playlist for the Planet competition.

The Symptom And The Sick