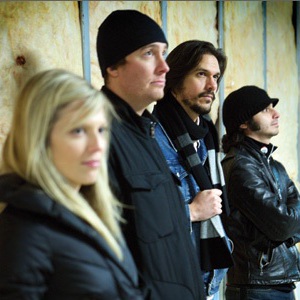 Described by fans as a Wes Anderson movie come to life, Ohio's (Columbus/Cincinnati) PAPER AIRPLANE has set its path on creating melodic, vocal-based music that never really goes where you think it will - and don't be fooled by the sunny melodies, the songs often deal with topics most bands would rather not touch. Paper Airplane has supported such national recording artists as Mates of State, The Walkmen, Rogue Wave, Matt Pond PA, The National, Robbers on High Street, The Redwalls, Richard Swift, Howlin' Maggie, the legendary Dick Dale, The Minders and more.

Since the 1990s singer/songwriter and crime journalist Ryan Horns had been performing under the solo name "The Last Hotel," basing songs on offbeat topics, people and events he had written about as a small town crime reporter. The music received regional critical acclaim, radio play, major label attention and dedicated fans after its self-titled EP was released in 2003. But by the end of 2004, Horns wanted a change. The point was to completely start from scratch and base everything on the music.

With a strong DIY approach, things soon fell together. He reformed with a group of friends as Paper Airplane in early [yearformed]2005[/yearformed[ and since then the group's underground status has risen fast, garnering media praise, spots on the Desdemona Festival, Midpoint Music Festival, the Midwest Music Summit, NXNE and was named among Columbus Alive's 2007 "Bands to Watch." All this without even having an album out yet.

The group has been able to mobilize a great regional following based on a tight, decidedly more aggressive and spirited sound than those shows of the past. Its sound is always evolving. With drummer Antonio Garza, bassist Caleb Bandy (Templeton, Jon Chinn) and keyboardist Teresa Kent, Horns and the band have found a way to focus on the craft of songwriting, often jumping across the board from dirty garage rock to delicate acoustic melodies and harmonies, while always staying true to themselves. The Paper Airplane debut release "Middlemarch" is out now on Columbus, OH. indie label All Hail Records ? Keep an eye out for shows in your hometown.