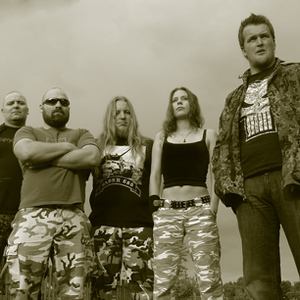 War is an art. Namely, this Danish Panzer Division is known for their morbid fascination with huge tanks. In 1993, when Michael Enevoldsen left the death metal band Illdisposed, the group was born. Uncannily, an onslaught of disagreeable circumstances were to come. In 1996, their first album, "Six Seconds Kill", was recorded and released by the label Serious Entertainment, with the debut effort very well received in the death metal scene. In 1998, a totally revamped Panzerchrist recorded their second album, "Outpost Fort Europa", also released on the Serious Entertainment-label.

Only drummer/founding member Michael Enevoldsen and celebrated vocalist Lasse Hoile remained of the original line-up. In 2000, Panzerchrist released one of their heaviest albums bar none, "Soul Collector", on their shiny, new label Mighty Music. At the risk of being esoteric, the lyrics were done completely in German. Alas, it proved to be right up their fans' alley, adding a new dimension to the audial essence of total death worship. It would be unjust not to stress here that their entire body of work is apolitical and contains no rhetoric sympathetic to national socialism. Founding member of Panzerchrist, Michael Enevoldsen, had at this time switched from drums to guitars and had furthermore collected the following souls to make the absolute strongest Panzerchrist album so far: Reno Killerich (who delivers one of the most intense drum attacks in metal history), Bo Summer (whose vocals intensify the level of brutality drastically), Michael Kopietz (who used to play guitars in the death metal band Frozen Sun) and female bass player Karina Bundgaard (who also played on the previous album "Outpost Fort Europa"). The entire album is focused on war. From the song titles to the cover itself. The cover (shot by a close friend of the band who was stationed in war-ridden Kosovo) displays a graveyard with several destroyed tanks and troop carriers. To those of you interested, the tank on the cover is the Yugoslavic version of the Russian T-34 main battle tank. In 2002, the fourth album, "Roomservice", was released on Mighty Music. Still yet another line-up emerged once again. With "Roomservice" they returned to English lyrics, but the themes never changed. The music had at this point became very much blackened death metal-oriented, coupled with hyperblasts and even keyboards. In 2006, record number five, "Battalion Beast", was released on "Neurotic Records". The new album introduced a devastating new sound, for the band had moved even closer to their cold, tremolo-picking black metal roots. Reno Kiilerich left the band precariously before the recordings and was quickly replaced by Bent Bisballe Nyeng from the band Die, but his style proved ill-fitting. Again Reno recorded drums for this one yet it is uncertain if he was to stay with Panzerchrist or not. In December of the same year, long-time lead guitarist Frederik O'Carroll left the band stating: "After having thought about it for quite some time now I've decided to leave the band. I've had a great run and I wish the rest of the band the best of luck."

It is currently unknown how Panzerchrist will handle their ever-evolving line-up in future. At any rate, they fight where they are told, and they win where they fight.