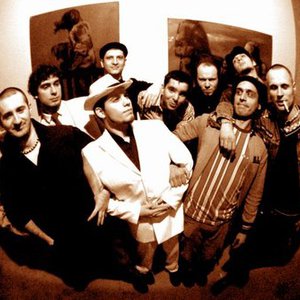 From Eastern Central Europe with a natural sound, the Pannonia Allstars Ska Orchestra a.k.a. PASO set off in 2003 to introduce Jamaican-style ska to Hungarian audiences. The folks liked the style, and as the band focused on live performances for about a year, emotions rapidly soared. Being one with the audience has never been a problem for the group. In the early days it was even hard to distinguish where the band started and the audience ended, this group of ten was everywhere.

It was this heavy interaction with fans that helped them to fullfill their deepest aspirations and lay down the foundations of their totally unique style.

Some say it's hard to distinguish PASO's music from the jamaican originals. But the ones, who give the tracks a more careful consideration will ulitmately realise that this music is an exquisite blend of uptempo skanks, bedrock Reggae riddims, 2Tone tunes and deep dub echos, all merged with jazzy grooves and touches of the joyfully, realistic Eastern Central European musical heritage. This variety comes from the musicians' diverse roots. While they all share a love for ska, they come from different scenes in the Hungarian Underground ranging from hard core to big bands.

From the beginning, PASO pledged to retain the genuine consciousness of the ska and reggae movement. Leading vocalist KRSA's initial appeal is that as the Preacher he chants the tolerance messages to the public. Backed by Hungarian rude boy legend Janos, the guys never miss to have an impact. Their lyrics condemn discrimination of any sort based on gender, race, nationality and sexual preference. While taking stands on social issues, the band retains its jolly, fun-loving attitude.

As the group gained a substantial following at home, they started touring steadily in the Eastern-Central European region showing their style to their brothers with performances on Slovenian, Czech and Slovakian stages. Being a pioneer in the area, their efforts earned them ferocious success wherever they went and encouraged them to dive further into the scene. They started organizing parties, hosting a radio program, and having regular jam sessions with their sound system. Having their name already well established in the region, they set sail for the high seas.

So far they have shared the stage with The New York Ska-Jazz Ensemble, the Toasters, the Slackers, Dr.Ring-Ding, the Rotterdam Ska-Jazz Foundation and played on the same day at the same festival with Skatalites.

The Return Of The Pannonians