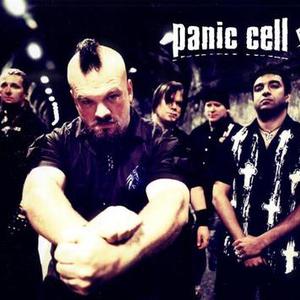 "Globe-trotting metal veterans PANIC CELL will help fly the U.K. flag at this year's Damnation Festival, they join an electric bill featuring THE DILLINGER ESCAPE PLAN, PARADISE LOST, ANAAL NATHRAKH, ALCEST, LAWNMOWER DETH and ROLO TOMASSI. Festival Director Gavin McInally said "A J?ger-drenched evening with PANIC CELL is a highlight of any festival. It's great to have those boys back in the U.K. after playing with the likes of METALLICA, ALICE COOPER and SLAYER earlier this year!"

Following a busy summer festival season for Panic Cell which saw the band playing to 300,000 people, Panic Cell return home to the UK in October and November 2010 with the long awaited release of CRAZY on October 18th 2010 as a digital download single and video (which features the band as lego figures). The video for Crazy can be seen soon on Scuzz TV, Kerrang TV and all over the internet!)
Just before that, October 15th 2010 sees the release of gritty Bollywood gangster movie PUSHER which features music by Panic Cell ? more details at www.pusherthemovie.com

Panic Cell released their 3rd album ?Fire it Up' in April 2010 on Undergroove Records to critical acclaim from the press and music industry:
* ?All metal and no bullsh**t..Excellent!? ? Kerrang ?All cylinders are revving at suitably high level ? Guitarist
?Crunchy groovey goodness..better than ever!? ? Sun Newspaper ?Simply stunning..a musical masterpiece? ? AltSounds

Frontman Luke Bell says ?It's the most honest, hard worked album we've produced to date?. And who would dare argue with the big man - From the blistering barrage of opening track ?Burden Inside' to the brutality breakneck of new video ?UnBroKen' - the Jagermeister drench inspired ?Black Juice' the bone crushing ?Splitting Skulls' to the beautifully crafted album closing track ?To Die For Lust' - Panic Cells new album is their best yet. The band describes it as ?a burner that's rewarding and rich - we dug deep and tried something different whilst at the same time keeping the big riffs, hooks and choruses."

Panic Cell celebrated the release of Fire It Up with a Jager fuelled slot at Hammerfest II, European dates with Life of Agony, The Damned Things, Anthrax and 3 Inches of Blood - and appeared at Download 2010 twice, headlining the Red Bull stage and making their debut live acoustic appearance on the Jagermeister acoustic stage. The band opened the main stage at Sonisphere Prague June 19th 2010 to Metallica, Slayer, Alice In Chains, Megadeth, Anthrax and Devildriver. July 2010 saw Panic Cell playing the biggest show of their career at Przystanek Woodstock in Poland alongside Papa Roach, Life of Agony and Nigel Kennedy!?! playing to over 250,000 people, the following day the band played the Lokerse Festival in Belgium opening the main stage for Alice Cooper and further European dates with Anthrax, Life of Agony and ILL Nino.

Fire It Up follows the bands first 2 albums ?Bitter Part of Me' and ?What Doesn't Kill Us' and tours with No.1 Billboard acts Disturbed and Staind, Mudvayne, Devildriver, Drowning Pool, Soil, Testament, Flyleaf, In This Moment etc and festival appearances at Download, Fields of Rock, Wacken, Bloodstock Open Air etc. 2008 saw the band produce soundtrack music for MTV's smash hit series ?Fur TV', the band also starred in various episodes.

Bitter Part of Me