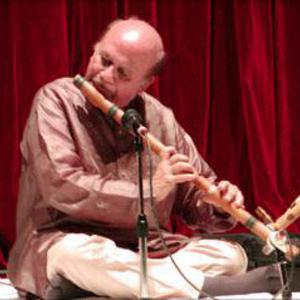 Raghunath Seth is the best of the mostly self-taught flutists, and is the only bansuri player whose light classical music rivals Hari Prasad. For a number of years, he was a colleague of Sachdev's early teacher Vijay Raghav Rao at the Government of India Documentary Films Division, producing and composing music for films. When Vijay Raghav Rao retired from his post as Director of the music division in 1980, Raghunath Seth was given the position and became his successor.

Like Hari Prasad, his music is a blend of many different influences. He often plays classical music in the style of the slow tintal gat favored by sitar and sarod performers, followed by a piece in fast tintal which is somewhat more similar to a chota kheyal than a true drut gat. Another musician who follows this kind of development is the famous sarangi maestro Pt. Ramnarain, with whom I was blessed to have had some lessons. Raghunath Seth has synthesized many styles into a unique presentation which does not resemble anyone else, and is characterized by excellent control of pitch, rhythm, and rag as well as a wide repertoire of diverse pieces, including such light styles as dadra, kajri, bhajan, and dhun. He is also fond of playing obscure rags in unusual scales derived from Karnatik music, often pentatonic, as does Vijay Raghav Rao.

Raghunath Seth uses a bamboo key to play the seventh hole of his medium-bore flutes. He also uses two different seventh holes, one tuned to Shuddha Ma, the other to Tivra Ma, and fills the unused one with beeswax according to the rag. The set-up of this key is very funky, and typical of an Indian village gizmo, the kind of thing that reminds you of days gone by. The extra seventh hole slightly changes the tuning of the third octave for the worse, and while he uses the third octave, he does not do so as extensively as Sachdev or Panna Lal Ghosh.

In his youth, Raghunath Seth met Panna Lal Ghosh, from whom he received more encouragement and advice than lessons. He clearly was influenced by Panna Lal, and this influence is visible in his music today, as he uses these seventh holes, and the third octave of notes, following the example of the pioneer in his own way. This is notable in contrast to so many of the current generation who have ignored the legacy of Panna Lal, even his own grandson.