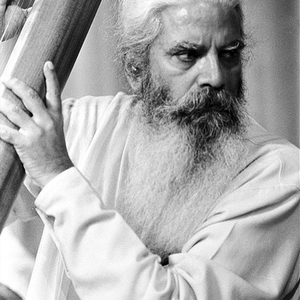 Pran Nath (Devanagari: ????? ????????) (3 November 1918?13 June 1996) was a hindustani classical singer and teacher of the kirana gharana (Kirana school), with a successful American career. Pran Nath was born into a wealthy family in Lahore in present-day Pakistan. While avid devotees of music (inviting musicians into the house to perform nightly), the family did not approve of his desire to become a musician...

Pran Nath was born into a wealthy family in Lahore in present-day Pakistan. While avid devotees of music (inviting musicians into the house to perform nightly), the family did not approve of his desire to become a musician, so he left home early and took up residence with his guru the legendary (but reclusive) singer Ustad Abdul Wahid Khan of the kirana gharana, nephew of the very famous Ustad Abdul Karim Khan, and stayed with him for 20 years. Both guru and disciple were much attracted to mysticism: Ustad Abdul Wahid Khan, the Muslim, to sufism, and Nath, the Hindu, to a Shaivite sect in Dehra Dun. It is said that Nath lived in a cave near the Tapkeswhar temple to shiva for five years, but eventually married and reentered the world at the request (guru dakshana) of his guru, in order to ensure the preservation of the Kirana style. In 1937, he became a staff artist with All India Radio.

However, Nath stuck to the very austere and increasingly anachronistic dhrupad, devotional singing style ? heavy emphasis on alap, and very slow tempi ? which suited his voice well, but was not very popular to the modern Indian taste. At the time, the elder brothers Dagar were the primary exponents of the style, who toured and recorded largely at the behest of Alain Dani?lou. Nath supported himself as a music teacher, for example at Delhi University from 1960 to 1970.

In that year, Nath's life took a drastic turn upon contact with American composer La Monte Young and visual artist Marian Zazeela, who heard his first issued recording Earth Groove: The Voice Of Cosmic India (released in 1968 on the budget Douglas label, a subsidiary of Laurie Records), and persuaded him to come to the US. In 1972, he established his Kirana Center for Indian Classical Music in New York City and stayed in the US for the rest of his life. He taught at several universities and above all attracted a strong following among the American minimalist composers. His students include Young, Zazeela, Terry Riley, Charlemagne Palestine, Henry Flynt, Jon Hassell, Don Cherry, Lee Konitz, Jon Gibson, Yoshi Wada, Rhys Chatham, Michael Harrison, W. A. Mathieu, Sufi Pir Shabda Kahn, Christer hennix and Simone Forti.

Nath made many recordings in the US, which are valuable documents of the Kirana style which was also practiced by more popular singers such as Gangubai Hangal and Krishna Hangal, Mashkoor Ali Khan, Rasiklal Andharia and the extremely popular Bhimsen Joshi. Three recordings were released during his lifetime, the aforementioned Earth Groove release, one by the Shandar label in France and the other by the Grammavision label in the US. Posthumously, Midnight, a double CD (Just Dreams JD 003) with two full-length live recordings of the same bandishes in raga malkauns from 1971 and 1976 was issued, as well as a CD of a 1972 recording made in Paris, France of Ragas Shudh sarang and Kut todi on the Sri Moonshine label.