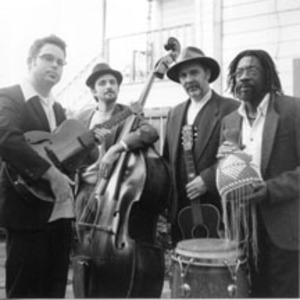 Palm wine music is a West African style of guitar music, mainly from the countries of Sierra Leone, Ghana and Nigeria. It dates back to the days when Portuguese sailors introduced guitars to West Africa. Early African guitarists played at gatherings where revelers drank palm wine, the naturally fermented sap juice of the oil palm. Their influence can be heard in both highlife and soukous guitar players.

In its pure form, palm wine music is mostly acoustic played on a couple of guitars and accompanied by percussion. The late S.E. Rogie, the "Golden Voice of Sierra Leone", is the godfather of modern palm wine music. In the 1950s and 60s, he introduced electric guitars to the traditional acoustic guitar/percussion palm wine configuration. This subtle mix of acoustic and electric guitar reinvigorated palm wine music and it experienced a resurgence in popularity that took palm wine music beyond the shores of its native West Africa. In the 1980s, Rogie lived in Oakland, CA. It was there that Richard Linley, founder of the Palm Wine Boys, learned the style from the master himself. "It completely changed my life", Linley says of his experience playing with Rogie. "I was just really, really searching for a way to express the music I loved; the African music and the folk music together. I'd never heard them played and mixed before even though that's essentially what I was searching for. What I had heard of, of African music, was the highlife, soukous, township jive, all dance type of music, which is great, I love it. What seemed to be going unfulfilled was the ignoring of the songwriting part of myself; my folk roots. I didn't know how to mix the two and hearing him was like ?wow'?he was doing what I felt inside."

The Palm Wine Boys play music of gentle conviviality, soaked in the confidential fluids of the small hours, back country places, front porches, village shade trees, moonshine, and, of course, palm wine. Starting with the roots of both North American and West Africa music, they create music which is simultaneously tranquil and yearning; both invigorating and contemplative. With their intertwining guitars, simple catchy rhythms, and harmonizing voices, this is a group that entices the listener to sit back and enjoy while letting their feet tap on the floor.