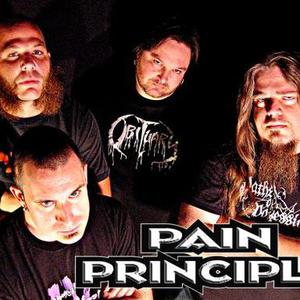 Created in 1993 in Orlando, FL by vocalist Kevin "Bull" Bullock and guitarist John Sutton, Pain Principle began as an outlet for two jam buddies with a penchant for Death and Slayer. The two kindred spirits soon recruited drummer Mike Mazzonetto and the foundation had been set- one sturdy enough to withstand years of bone-breaking metal. After a handful of demos ['Live With It' (1993), 'Until Someone Loses an Eye' (1996), Pain Principle (2003)] were unleashed into the underground, Pain Principle is eager to strike the surface with a vigorous start .

After a handful of demos ['Live With It' (1993), 'Until Someone Loses an Eye' (1996), Pain Principle (2003)] were unleashed into the underground, Pain Principle is eager to strike the surface with a vigorous start .

Over the past few years, Pain Principle has seen it all- from marriages, divorces, deaths of friends, and new beginnings. Though one constant remains- their signature style- a savage crossbreed of deathly heavy hooks and classic metal structure.

Citing legends like Pantera and Death as primary influences, Pain Principle draws from all over the metal landscape to create their sound. "Even though it's not remotely the same thing, I like a lot of classic rock and classic metal?as far as the way you structure songs and structure choruses we might do things like that but we might not use the same tones," explains Bull. "I may be growling but the structure might be more like your standard classic metal."

Passing by offers that seemed less-than-promising, the band signed to Blind Prophecy Records in 2007 and the ass-busting began. Having recorded in Mana Recording Studios in St Petersburg, Florida with famed producer Erik Rutan (Hate Eternal, Cannibal Corpse), Pain Principle have spent most of 2007 seeing that their debut release reflects the real Pain Principle

Waiting For The Flies