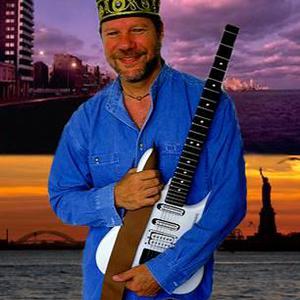 The music of Pablo "Mezcla" Men?ndez is as unique on the Cuban landscape as the man himself. The fact that he is a US citizen living in Cuba for over 40 years has deeply influenced his musical choices and outlook. http://www.cubamezcla.com/Mezcla_Home_files/Pablo-Mezcla-Menendez.gif Leader of the Cuban septet MEZCLA, guitarist Pablo Men?ndez was born in Oakland, California and is the son of jazz and folk singer Barbara Dane. He moved to Cuba in 1966 at age 14 to study music at the National School of Art in Havana and has lived there since.

Leader of the Cuban septet MEZCLA, guitarist Pablo Men?ndez was born in Oakland, California and is the son of jazz and folk singer Barbara Dane. He moved to Cuba in 1966 at age 14 to study music at the National School of Art in Havana and has lived there since.

"Pablo Menendez is not your average everyday Afro-Caribbean or Latin jazz musician. His vision of this music stretches back to traditional jazz and show tunes and up to electric urban blues, modern post-bop, Cuban or Puerto Rican music, and contemporary neo-bop spawned in the 1970s. As a guitarist he is strong individually in these varied styles or disciplines, but as a bandleader he stretches out even further, taking his Mezcla ensemble into these disciplines of jazz and music both beyond and including Latin sensibilities." Michael G. Nastos (Allmusic.com)

In the late 1960s Pablo was one of the founders and the youngest member of the Grupo de Experimentaci?n Sonido del ICAIC, a seminal group based in the Film Institute under the direction of the renowned Leo Brouwer. Known for its experimental fusion of Cuban genres with North American, Brazilian and Classical styles, the GES (Experimental Sound Collective) set a whole new direction for Cuban popular music. At the Film Institute, Pablo composed film music and Cuban jazz/rock fusion pieces, as well as arranging songs for the youthful singer-songwriters Pablo Milan?s, Silvio Rodr?guez and Sara Gonz?lez, now world-famous icons of Cuban song. After this decisive experience, Pablo Men?ndez worked in two completely different but equally important bands. The first was Sonido Contemporaneo, led by sax player Nicol?s Reinoso, which functioned as the "house band" at the "El R?o" club, center of the Cuban jazz scene of the '70s and for a good part of the '80s. Pianist Gonzalo Rubalcaba was just one of the amazing alumni of that band. The other band was Carlos Alfonso's group, S?ntesis which achieved a very sophisticated fusion of
elements of Nueva Trova, Rock and Jazz Rock, with Afro-Cuban Yoruba music.

In the minds of most of his Cuban and international audiences, Pablo is most closely associated with Mezcla, the Afro-Cuban Jazz rock septet he founded in 1985.

in a San Francisco Examiner interview, the legendary guitarist Carlos Santana stated that Mezcla was his favorite band from Cuba, even joining Pablo onstage at the Yerba Buena Center for the Arts. Pablo says "it was as if we had been playing together forever and knew each other's minds: different ways of speaking the same language."

Mezcla has issued several critically acclaimed recordings including "Akimba" (Khaeon World Music) which garnered a Grammy nomination, and their recently released "I'll See You in CUBA" on Zoho Music.

Pablo also released a solo project on Zoho Music entitled "Havana Blues Mambo" and has led a US-based Cuban All Star ensemble for performances at venues such as Regatta Bar in Boston and Yoshi's in Oakland, California. In January of 2009 he was invited to share the bill and perform with Larry Coryell and John Stowell at the Jazz Guitar Summit in Olympia, Washington.