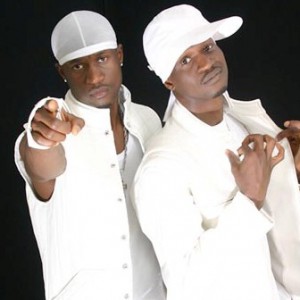 P-Square, a musical group of indentical twins, Peter and Paul Okoye. The duo began their music and entertainment career mimming and dancing in various shows and church events in Jos, Plateau State, Nigeria where they grew up. In 2001, while at the University of Abuja, at a talent show competition they won the "Golden Tones - up & Coming Band" competition with the track "Kolo" from their debut production.

This quickly shot them into prominence and their smooth R&B voice blend and modern african hip-hop beat ensured that songs such as "Last Nite", "Kolo" and "Igbedu" took the airwaves and dance halls by storm.
P-Square have fully established themselves as a leading R&B/Hip-Hop group on the African continent. Their current album, "Get Squared" has followed up the success of their first "Last Nite" and has won many awards home and abroad.