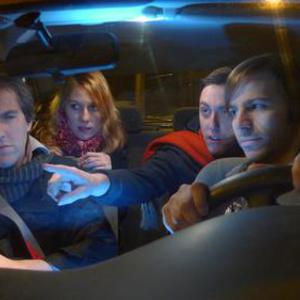 There are several artists worldwide currently performing under the name Overlord, as well as several defunct groups that have used the name: Current 1. overlord is an indie pop band from Brooklyn, NY. Overlord is on an indie label, Storm Tower Records, and has released 5 full-length records and 2 EPs. The band consists of: Tris McCall, Matt Houser, Sarah Brockett, and George Pasles. The most recent full-length album, In Soviet Russia, My Heart Breaks You, was released on April 1 2011, and spent 3 months on the CMJ Top 200 charts. Site: www.overlordusa.com.

02. Overlord is a 4-piece featuring members and ex-members of BORN FROM PAIN, THE SETUP, DIABLO BOULEVARD and LENG TCH'E. Our mission: dark and heavy hardcore with a sludge influence.

03. Overlord is a Heavy Metal band from Canada.

04. Overlord is a Black Metal band from Croatia.

05. Overlord is a Black Metal band from Serbia.

07. Overlord is a classic heavy metal band from Oxford, UK, formed in 2011, consisting of Tal Fineman, Rhys Williams, Josh Knight and Kyle Edwards. They have released a single EP to date.

1. Overlord were a Seattle hard rock band from 1980 to 1984. They released their self-financed ep, Broken Toys in 1982, appeared on the 1984 compilation, Northwest Metalfest and recorded an unreleased album, also in 1984. Some consider them to be a precursor to the "grunge" to come. Members went onto form My Eye,

2. Overlord was a Death Metal Band from Poland, now split-up, who formed in 1992.

3. Overlord were a sludge/doom band from the Isle of Wight, UK, who released several EPs ("Katerina Was A Beautiful Angel" EP- Inspired heavy Soviet riffs) and played a number of gigs around the country before going on indefinite hiatus.