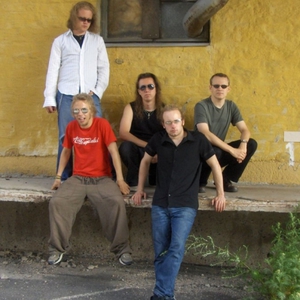 Overhead the name of four popular bands. One is a French alternative/indie band and the other is a progressive rock band from Finland. There was also a third band called Overhead from Portugal. The fourth one is a band from New Zealand that plays rock and roll. The following information refers to the Finnish band. Alex Keskitalo: vocals and flute Jaakko Kettunen: guitars Tarmo Simonen: piano and keyboards Janne Pylkk?nen: bass Ville Sj?blom: drums

The following information refers to the Finnish band.

Overhead is a Rock/Metal/Progressive band from Finland with a fresh and original sound. Overhead plays melodic and thematic music that varies from gentle ambient atmospheres via more traditional rock to heavier moments.

Overhead's first album 'Zumanthum' was released in 2002 by Mellow Records. The second album 'Metaepitome' was released in 2005 by Musea and was very well received around the world. The album broadened Overhead's style and was a big step forward from the debut. Metaepitome received excellent reviews and was the album of the month in various magazines and webzines and received airplay on many radios worldwide.

Overhead has played live in rock-clubs and festivals around Europe, such as ProgResiste Convention (Belgium), Prog'Sud (France) and pROCKfest (Germany) to name a few.

The awaited third album titled 'And We're Not Here After All' was released in 2008 by Musea. The album took Overhead's own distinctive sound further, combining vintage and modern with the future. The release was followed with more intensive touring, ensuring Overhead's place on the map in the prog-rock world.

In 2009 the band headed to Poland to play at the Prog Rock 2009 festival where Overhead's first DVD 'Live After All' was recorded. The DVD was released in by the Polish Metal Mind. The band further supported the new album and DVD with their longest tour yet, playing very successful shows around Europe. The tour also celebrated the 10th anniversary of Overhead.

In 2012 Overhead is back with a new album "Of Sun and Moon", released by Progressive Promotion Records.


Some information about thrash metal band Overhead from Portugal:

Overhead was from town called Porto. They released at least one demo called Eyes of the Future. That happened in early 90s. The members of the band were Camilo, Paulo, Vitor and Nuno.

Of Sun And Moon

And We're Not Here After All