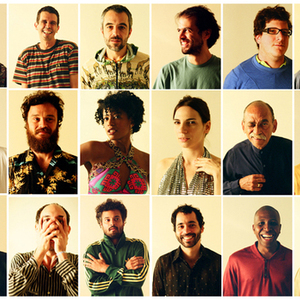 Orquestra Imperial are a Brazilian Big Band formed in 2002 with the objective of becoming a typical Gafieira samba band. The group brought together notable names from the new Carioca pop scene such as Rodrigo Amarante (from the group Los Hermanos),Moreno Veloso, Domenico Lanceloti and Kassin(from the +2 project), Nina Becker, Thalma de Freitas, Max Sette and Rubinho Jacobina with experienced musicians like Nelson Jacobina and the samba percussionist and singer Wilson Das Neves (composer of the Imperio Serrano GRES).

Other musicians who have contributed to the Orquestra include Berna Ceppas, Rodrigo Bartolo (who plays with Arnaldo Antunes and Duplexx), Pedro Sa (Caetano Veloso's guitarist), Bidu Cordeiro (who accompanied the Paralamas do Sucesso and Reggae B) and DJ Marlboro who has gained the title of official Orquestra Imperial DJ.
The band released their first and only album Carnaval S? No Ano Que Vem in 2006 on the Brazilian label Som Livre and internationally via Totolo and they appeared alongside Caetano Veloso and other Brazilian musicians at the Tropicalismo festival at the London Barbican in early 2006.

The official site is: http://www.orquestraimperial.com.br/