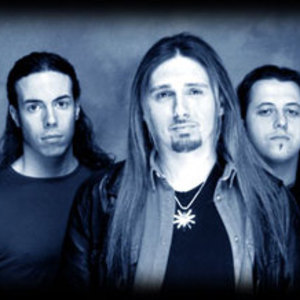 Oracle Sun The band born in 2002, by Frank Andiver (one of the most important person in italian metal playing with Labyrinth, Wonderland, Shadows of Steel,ecc.) on drums, Emy Manuguerra (Angel Grace) on guitar, Val Shieldon (Sigma) on vocals, Fabrizio Marnik (Seven Gates) on keyboards, and Alessandro Cola (Mandragora Scream, Shining Fury) on bass. The idea of all the members of the band is to create a kind of "work in progress", not to fossilize on a specific way to play music, but to find new solutions and alternative sounds for their intentions.

Of course, the band will be ever a metal band!
The starting point is the debut Deep Inside in 2005 under Scarlet Records and King Records (for Japan only).

Val starts singing in 1989 and creates his first band (prog metallers Silent Scream) in 1993 recording a demo. In 1996 the band splits up and he begins the search for another band. Not finding something good he records himself a three-tracks demo to find a new band; after a few offerings, he finally begins to work with Sigma for their self-titled debut under Atrehia Records in 2000. The band starts a tour supporting bands as Labyrinth, Vision Divine and playing at the Gods of Metal in 2001.
He leaves Sigma for logistic problems and finds Oracle Sun in 2002 in which he records the debut album Deep Inside.

Emy Manuguerra begins to play guitar in 1993 and establishes his first band in 1998: the italian prog metal band Angel Grace which records in 2001 the Album "New Era Rising", published by Underground Symphony.
In 2002 starts to work with the project Oracle Sun, band formed by other important musicians of the Italian scene, and in 2004 finishes to work on the debut album "Deep Inside".
Since 2001 he's been working with Roxy Bar Band, one of the most important Vasco Rossi's cover band, collaborating with musicians as Andrea Braido, Maurizio Solieri, Daniele Tedeschi, Oro, Andrea Innesto.
In October 2004 he builds up the cover band Purple Snake.

He starts playing the guitar, but after 2 years finds his real love in the modern keyboards in 1998. He plays with Overture (Dream Theater cover band) in which he plays live for some years.
He enters Seven Gates in 2000 and records the debut "Unreality" (Megahard Records) in 2002, promoting the album with an italian mini-tour.
The second album "The Good and the Evil" is just finished and will be released by the end of 2005.
In 2003 enter Oracle Sun recording the first album Deep Inside in 2004.

He starts play the bass in 1991, influenced by players as Steve Harris, Geezer Butler and John Paul Jones, and begins to play with some local bands (covers and some attempts with original songs). He works with Maubba, Paincrypt( one of the most interesting realities in the middle of nineties) and Nightmarish (sort of prog band influenced by the seventies' way to play). In 2001 the first great chance is to enter Mandragora Scream for the tour in support of their debut "Fairytales from Hell's Caves" (Nuclear Blast), then forming with Ross Lukather, Tommy Pellegrini and Francesco Neretti the band Shining Fury. The band releases the debut Last Sunrise under Metal Blade Records in 2004; then, because of musical divergences, splits up in company of the other members, leaving Ross Lukather alone.
In 2002 begins to work with Oracle Sun and records the debut of the band Deep Inside, released in 2005.