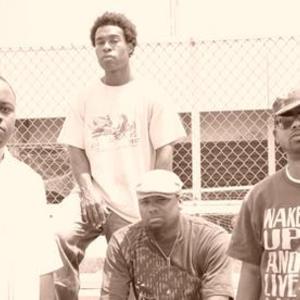 For us all, the hip-hop group Opus Akoben stands up with their weapon ? the weapon against clich?s which often times are set up by those which are withdrawn from the real world. A weapon forged within a wide musical culture with a strong identity. Washington D.C., the federal capital of the United States, is the place where the band's three vocalists, Carl Walker (aka Kokayi), Terence Nicholson (aka Sub-Z) and Joshua Culbreath (aka Black Indian) started out. They met through their involvement in the Freestyle Union which was founded in 1994 by Toni Blackman and Monty Taft.

This creative arena was designed as an ongoing workshop dedicated to the ?elevation of the rhyme? in which any kind of physical or verbal aggression was banned. Besides this precious and inviolable rule, the focus was placed on inventiveness, freedom, efficiency and emulation. Kokayi and Sub-Z thus found themselves within the circle of the initiates (the cipher). The participants gave each other encouragement and a safe haven for creativity, a concept the Union's founders liked to impose on the daily lives of these budding artists. Each freestyler bounced on his predecessor's words and the three vocalists of Opus Akoben were among the first to be widely recognized. Their rhymes, speeches and improvisations cracked! And when the saxophonist Steve Coleman looked for rappers for his Metrics project, his attention was drawn to these two phenomena.

After a successful European tour in 1994, they continued to make their first live recording at the Hot Brass with Steve in March 1995. For this Hot Brass recording and to complete this vocal duo, the saxophonist hired the young Black Indian ? at that time, a 16-year old rough diamond. The result measured up to the challenge, since this meeting between rap and jazz to this date remains one of the most convincing ones. Following this exceptional adventure, Opus Akoben forged ahead as leaders to produce their first record ?Art of War? for BMG France. A promising achievement in which some jewels may be heard (such as ?Don't Run?, ?Art of War?, ?God/Devil? and ?Cross Fade?). From here, it is time to move on to something else ? to discover other sound textures, to make the fruit of their work richer, denser, more refined and more personal.

In 2000, Black Indian released his album ?Get'Em Psyched? which was released by MCA and included the legendary Biz Markie and amicably left the group. Sub-Z recites his texts soaked with esoteric verse with the Cuban pianist Omar Sosa (Sentir/Ot? Records, 2002) while Kokayi joins the band of the pianist Andy Milne (New Age of Aquarius/Contrology Records, 1999) and produces the New York singer, Vinia Mojica. These projects, apparently part of the iceberg, hide the profound work achieved by these adventurers. Unceasingly listening to new sounds, these street magicians pace up and down studios, concert halls and schools to keep in touch with the real world, the one they come from, the one they talk about. They don't want to fall into this ?ego trip? defended by a large part of the hip-hop show business! In order to keep ?elevating the rhyme? and the debate, they have to stick to reality. This is the price for their texts and claims to remain as sharp and reflect stubborn realities.

The two accomplished artists thus showed up to the Label Bleu studios in Amiens in December 2001 to record their new album. Why a jazz label? ?Because this gives us more freedom and we already know Pierre (Walfisz)!? explains Kokayi. This puts an end to the discussion regarding the artistic cohesion between the label selection and the music produced by Opus Akoben. According to Sub-Z, ?our ultimate aim is to function with the innovative spirit which is supposed to be conveyed in hip-hop.? Is innovation not a theme recurrently claimed by jazzmen and other ?homing heads? of the artistic microcosm? It was therefore quite natural for the Paris-based flutist Magic Malik to join the band for one of the strongest themes of the record ?Place to Place,? and for the other members of the band to build the strongest and most stimulating background for these three leaders. For years, all these ?sidemen? have been writing Opus Akoben's history. This largely explains the sound unity and cohesion between the fourteen songs and the only instrumental title, ?Metro:Paris.? The guitarist Stanley Cooper, the bassist Ezra Greer, the drummer Jay Nichols and the Turntablist John Ashford (aka AyCE International) also come from Washington, DC. Links between the differently evoked universes are numerous; they only need to be discovered. It is a photograph of the results of the crucial research by these hip-hop scientists. Considering the speed at which they move forward, we'd better not miss this step! ..